JEFFERSONVILLE, In. — Organizers of Abbey Road on the River are pleased to announce the return of the world’s largest Beatles-inspired music festival this Labor Day weekend. Due to Covid, the festival held over Memorial Day weekend since 2005, was three times postponed. This year, the event is back for the full 5 days of peace, love, and music of the 60s and 70s.

Abbey Road on the River will be held Thursday, September 2- Monday, September 6th at the Big Four Station Park in Jeffersonville. Jefferson Starship, the band that descended from Rock and Roll Hall of Fame Inductees and 2016 Grammy Lifetime Achievement Award Recipients Jefferson Airplane, will headline this year’s festival. 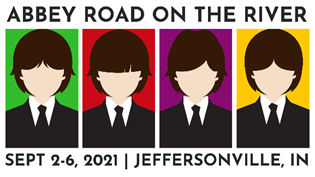 Their performance will take the audience on a psychedelic rock adventure with their chart-toppers like “Jane,” “Somebody To Love,” “Miracles,” “White Rabbit,” “Volunteers,” “Count On Me” and many more. The current Jefferson Starship lineup features founding member David Freiberg, along with Donny Baldwin, Jude Gold, Cathy Richardson, and Chris Smith.

Grammy-winning manager, record producer, and SiriusXM Radio host Peter Asher of British pop duo “Peter and Gordon” will also perform at the event. Peter was close friends with The Beatles, particularly Paul McCartney who lived in Asher’s family home in London, and he wrote for Peter and Gordon their #1 hit, A World Without Love.

As a producer, Asher was instrumental in the careers of stars like Linda Ronstadt, James Taylor, Diana Ross, and Cher. Asher’s performances will include a full band, as well as stories that hit on the high points of his extensive musical career.

Joining the all-star line-ups are Grammy winner and former Wings lead guitarist Laurence Juber and drummer Steve Holley. Renowned Beatles tribute band The Fab Four, The Weeklings, Classicstone from Colombia, and Glen Burtnik of the Broadway hit show Beatlemania as well as The Orchestra (ELO) and Styx are also among the 45 bands scheduled to perform throughout the weekend.

To purchase tickets, make a hotel reservation, or get more information, visit www.arotr.com.