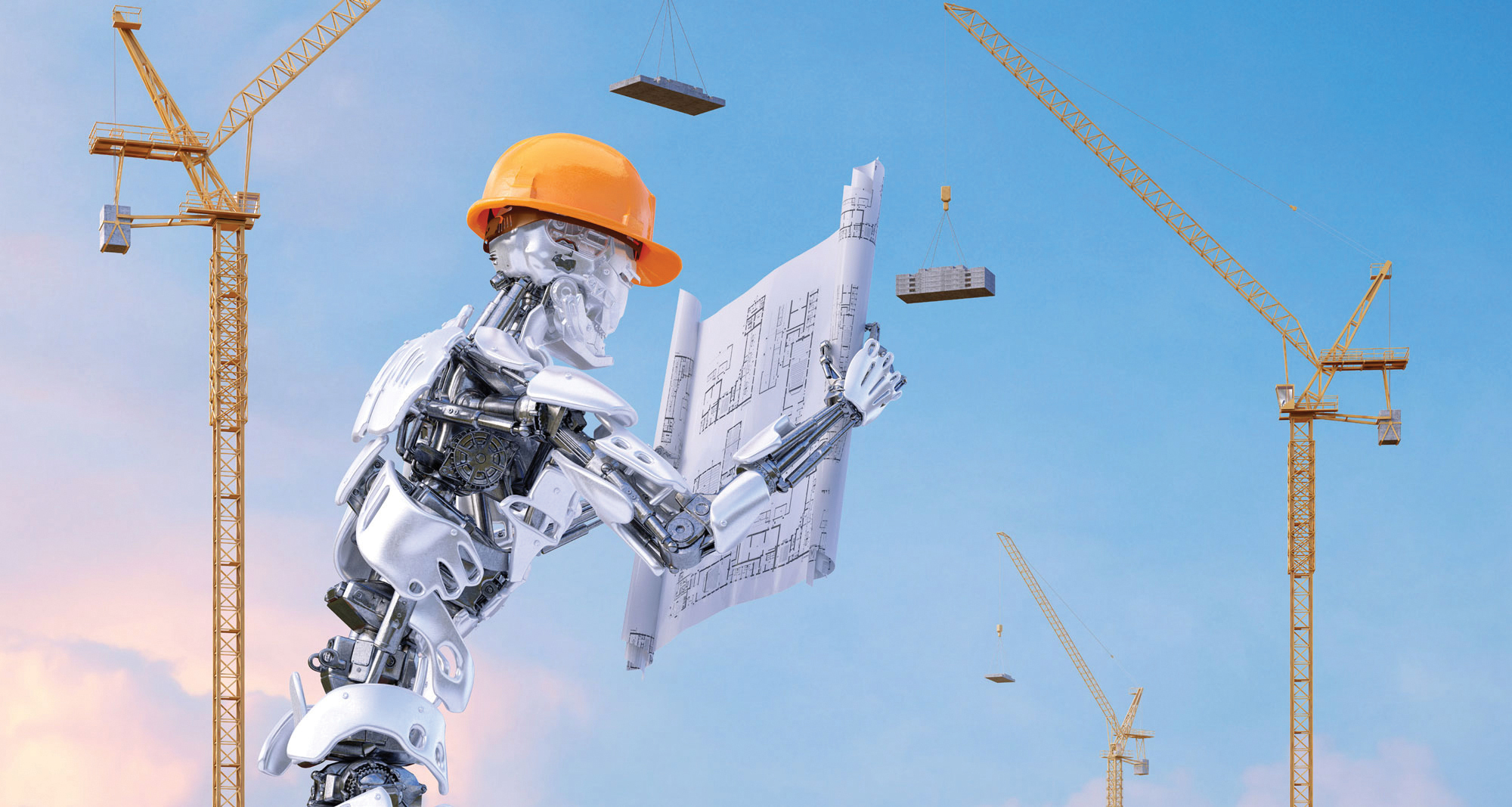 Robots and cobots, drones, autonomous and digital technology, and artificial and augmented reality tools are speeding up project bidding and construction for Kentucky’s construction project managers and contractors.

COVID-19 pandemic impacts have helped push adoption of new tools and processes, but the value proposition of more efficient new technology is a key factor as well.

“In the long run we have increased production per man hour,” said Paul Hemmer Jr., CEO of Paul Hemmer Co., a third-generation construction operation based in Fort Mitchell, Ky. “The cost of the equipment is high, but is it offset by savings. It’s an exciting time to be a builder.”

Hemmer is celebrating its 100th year in operation and has some of the founder’s hand tools on display in its headquarters offices. While Hemmer said his grandfather’s tools “make you appreciate the craftsmen of the past,” today’s tools get the work done twice as fast and require 80% fewer people.

Hemmer’s company transitioned from performing construction craft work in the early 1990s and today is a construction manager that hires the craft vendors for its projects, he said. It does actively design its products—on a digital platform that everyone involved in a project can visit at their leisure.

“Everything we do is cloud based and interactive,” Hemmer said. “It is accessible to all parties.”

Computer-assisted designs are drafted on building information modeling (BIM) systems. These collaboration software platforms allow all the parties involved in a project to see the status of plans or to contribute their portion. That may include the project’s owner or vendors, architects, designers, engineers, providers of mechanical, plumbing, fire protection and other systems. Material choices can be plugged in and the design platform generates exact materials estimates.

Tools have gone to GPS control
At the physical construction site, some tasks are performed by largely autonomous equipment whose work is programmed in, then guided by digital GPS measurement control. First, though, a fixed reference point, or datum peg, must be set so that GPS measurements and guidance have a constancy and consistency in space.

Site preparation tools and equipment “have all gone to GPS control,” Hemmer said.

There is still a human operator running construction equipment, but in some cases he or she is not necessarily on the machinery.

“The equipment could be managed from a trailer,” Hemmer said.

In such instances the operator might more properly be considered the programmer, who sets up the specifications that the machinery will create. Then they monitor the performance of job.
Repetitive tasks in modular environments, such as inspecting and monitoring ongoing progress of work on a project, are shifting to robotics.

Boston Dynamic has a four-legged, GPS-guided robot product called Spot. Referencing the site’s datum peg, Spot walks through a location and uses lasers and cameras to precisely measure current dimensions and specifications of a site.

Andy Burg heads the innovation team at Messer Construction, a job he has had for 17 years. The team has grown from just Burg to 29 people today.

Messer is currently in discussion with a prospective Kentucky client about acquiring a Spot for that project, Burg said.

The base price of a Spot robot is $74,500 and can climb significantly. The Enhanced Autonomy Package (with 360-degree cameras, lights, an upgraded communications system, and a lidar puck that can see in 360 degrees) adds another $34,570, according to the Boston Dynamics website. An additional battery is $4,600. Adding expansion ports to Spot so the user can install their own custom payloads is more than $1,000. A processing power upgrade is available.

Burg said Messer’s prospective client in Kentucky initiated the discussion of using Spot for its project.

“It was a surprise that they asked us,” he said.

More commonly, the company must be the one to suggest adoption of new technology.

Performing a human site walk-through for a 360-degree assessment is a tedious process and might be done once a week, but a Spot site assessment can easily be done daily. It can be initiated, monitored and its data assessed immediately from an office 1,000 miles away.

For tasks that are not only repetitive but physically demanding, cobots assist the site worker in lifting and placing 150-pound concrete blocks and other tasks.

Messer monitors new products and uses any tools it can to gain efficiencies, he said.

It is now piloting use of a building layout robot that translates a structure’s plans and prints the location of walls and internal component systems onto the prepared floor of a site, such as the concrete slab. The robot is a stubby, wheeled machine that “we call the layout Roomba,” Burg said.

In the next several years, he expects many of today’s consumer-grade technologies in augmented and artificial reality—think of gaming headsets—to be translated for construction-site use. 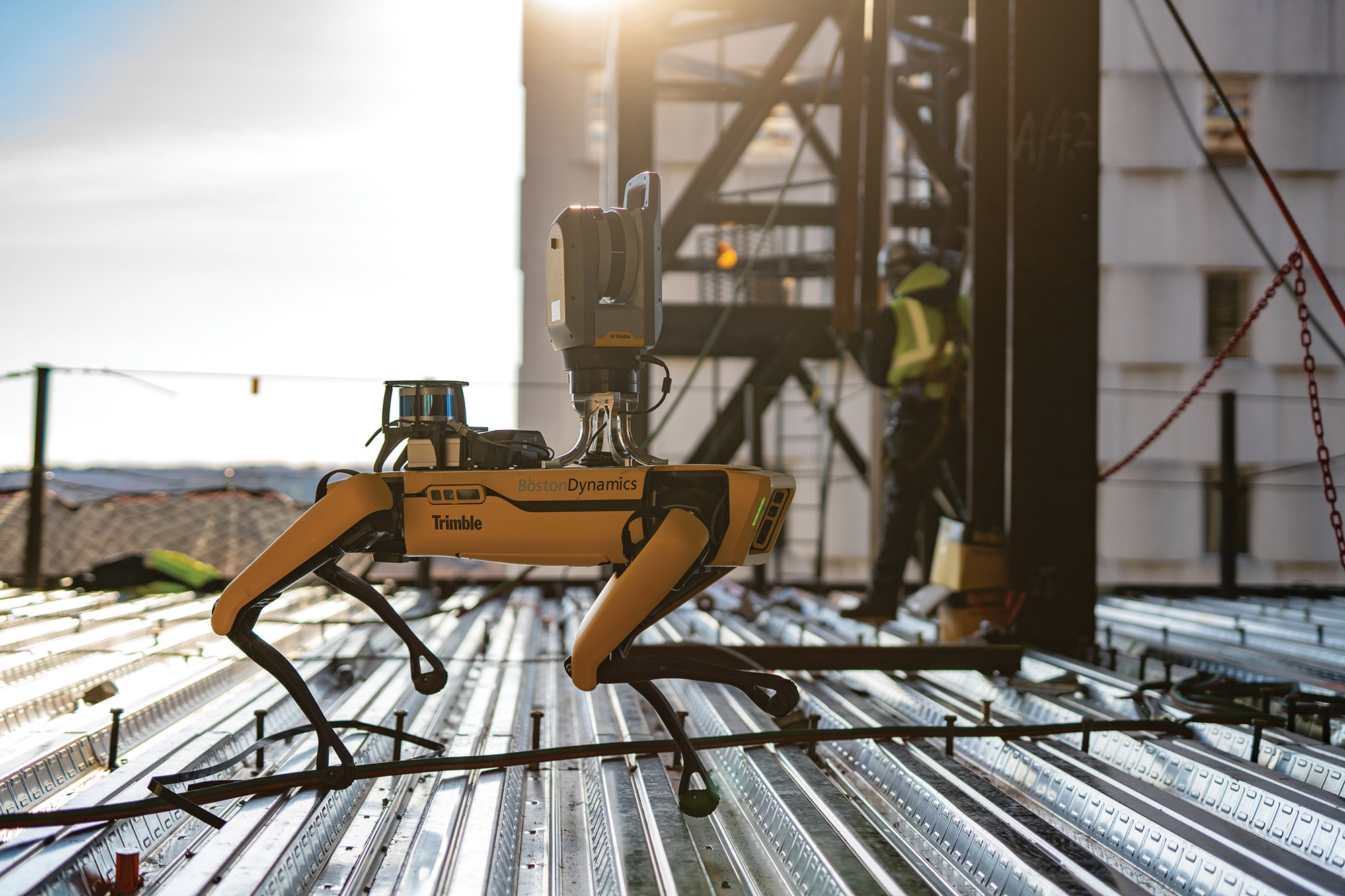 Drones and an ‘office on your head’
Artificial-reality headsets have been used for several years in the design process to allow clients a fully immersive view of a finished project and to explore what it will look like as the design-team members explain the special characteristics.

“This is particularly important in health care,” Burg said, so doctors, surgeons and nurses can get a feel for a proposed space “and see if it works before it is built.”
Drones with high-definition cameras are a common inspection tool today in the construction sector.

“We have been utilizing drone technology for years now and it continues to advance quickly,” said F. Hunter Strickley, executive vice president of Louisville Paving and Construction. “We use drones to measure stock piles at our plant operations. We also utilize drone technology on large site jobs to confirm topography for cut/fill as well as stockpiles on job sites.”

The 72-year-old highway contractor is the largest in Greater Louisville and is aggressive in adopting new technology.

“It has simplified our communication channels and allowed us to store resources for our employees all in one location. We can communicate between small project-based teams, divisional messaging or companywide broadcasts. We can also store e-forms that can be filled out and submitted directly through the Red e App platform.”

Burg, of Messer, volunteered that in the next few years, augmented reality is likely to become part of a new construction worker headgear that projects plan information for the wearer onto the inside of its visor. He likens the visual experience for the wearer as akin to looking at a transparent hologram.

Such technology will be able to incorporate email and other communications into headgear display, he said.

“Your office comes on your head” at that point, Burg said. “You won’t take drawings or tape measures onto the site. It will project images onto your visor.”

What is the value proposition?
Construction companies are constantly assessing and trying to make the case to themselves and to clients that the cost of new technology is justified.

“You have to prove its value and understand what value it brings to the job,” Burg said. “We have to have a problem to solve.”
New tech tools are expensive and require human management.

Messer’s innovation team attends conferences and monitors industry and trade media to stay abreast of new technology and trends. With 10 locations in five states, Messer’s association with a venture capital fund provides it access to products being developed at companies working to create new technology solutions in construction, Burg said.

Messer also is trying to leverage its database of photos from the past 17 years into a tool that can identify safety concerns and avert accidents and injuries, he said. It would alert as to the lack of protective headgear, gloves, harnesses or an improper ladder setup.

“A lot if it is time” savings, Culberson said. “Time is money, obviously.”

As designers call out materials for their sections, Revit provides exact quantities for materials required, Culberson said. “You can do a takeoff instantly on the amount of drywall or metal studs in a project. Once you get the design finished, you know all the quantities of materials in the building.”

Construction managers prefer to work with vendors who use Revit or similar tools as well. Those who do not insist on independently verifying or recalculating materials estimates, Culberson said.
The ability to use new technology “is one of the vetting steps to be a preferred contractor” for Hemmer and get work on its projects. Additionally, Paul Hemmer Jr. said, assembling teams for projects his company manages involves choosing vendors who communicate effectively and work well with other vendors in addition to executing as promised.

Today’s finishes and tolerances are tighter than ever, Hemmer said, and require modern technology to accomplish. 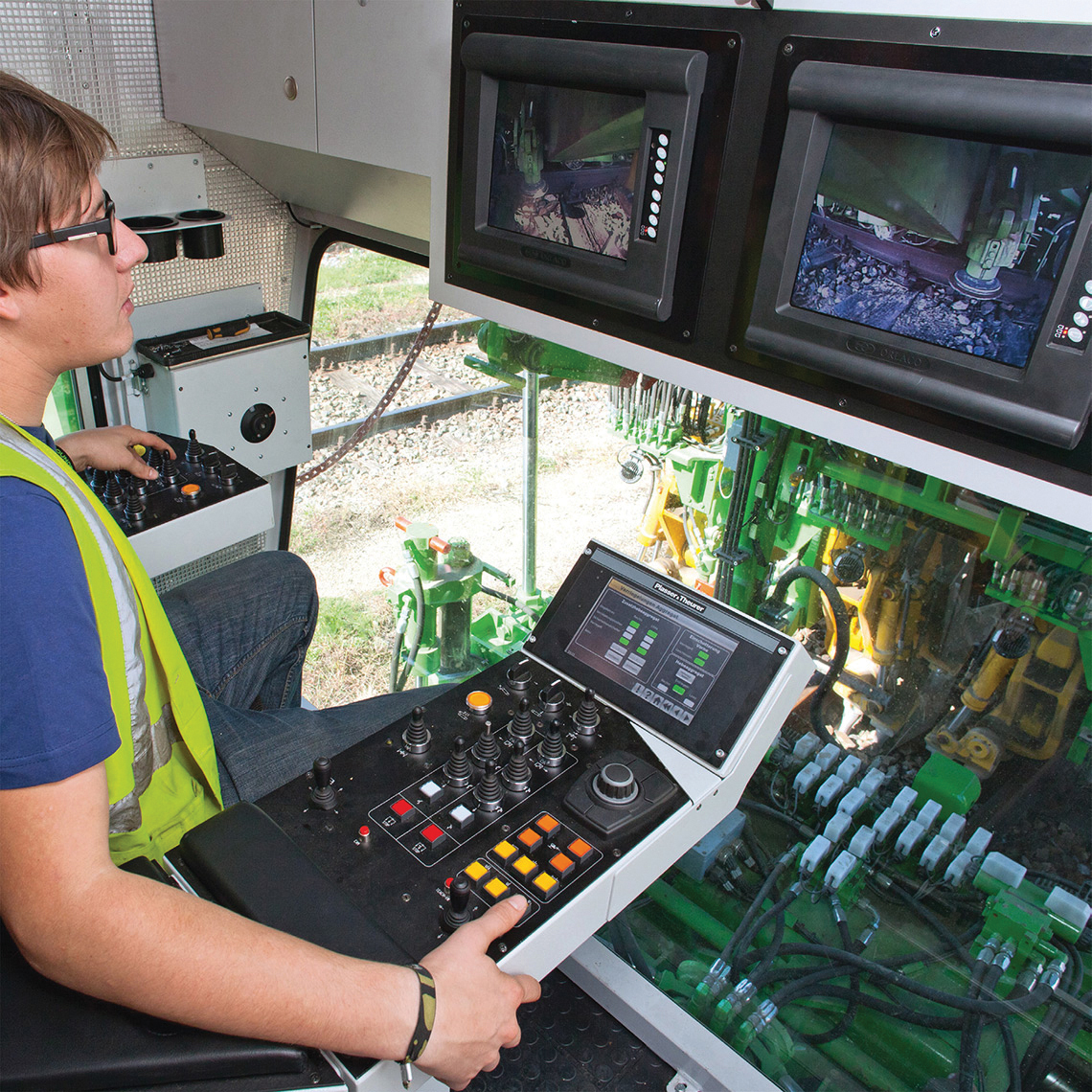 How savvy are clients?
Regarding their knowledge and understanding of new construction technology, clients tend to land in two general groups, Hemmer said.

The first group builds projects on a regular basis and for them the changes taking place are seamless and understood.

The second group builds on an as-needed basis every five to 10 years, and for them it’s new.

“Generally, they are interested,” Hemmer said, but there is an education process. An important step for them is being able to access job folders online to look at plans and see progress photos in real time.

Construction is a “very linear process,” Hemmer said. New technologies are sometimes faster but more often improve quality control or decrease the labor needed to perform a task.
Pouring cement for floors is a step Hemmer has seen become much more efficient.

“In one day, they can pour maybe 1,000 yards of concrete, an acre or more of floor, with 10 to 12 men,” he said. “In the past, a construction crew could only accomplish half as much space while requiring twice the men.”

He mentioned laser-guided concrete screeds that can precisely level wide surfaces, doing the work of five or six individuals. The website for Becosan states that its laser screeds can flatten 300 square meters of floor an hour.

Hemmer said he likes and embraces today’s stream of new technology tools but maintains contact with the tech he first learned.

“Our young managers will say, “Paul, all you have to do it this, this and this” to avoid holding a document in his hand, Hemmer said with a chuckle.

So while the newest generation at the company may find it quaint, Hemmer said, “I still like to touch paper.”

Featured Story: When Students Are Included, They Stay
October Issue of The Lane Report