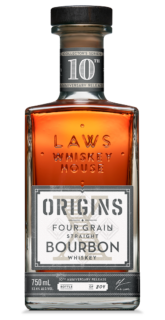 Laws’ Origins X is the brand’s oldest whiskey released to date, featuring barrels distilled in the first year of the company’s founding over a decade ago. Origins X contains whiskey from each of Laws’ initial 16 spirit runs, all of which were directed by Founder Al Laws with advice from his mentor and friend Bill Friel, Master Distiller Emeritus from Bardstown, Kentucky.

The bourbon laid down during this period features the same four-grain mash bill the distillery uses today made of 60% heritage corn, 20% heirloom wheat, 10% heirloom rye, and 10% heirloom malted barley.

In 2013, after two years of aging, Al Laws handpicked 28 Four Grain Bourbon barrels that included at least one barrel from the first 16 spirit runs. The whiskey from these barrels was then married in a stainless-steel tank and after a few days of mellowing, was reintroduced to the same #53-gallon #3 char barrels, re-numbered, re-racked and renamed with a single word — Origins.

The Origins series began as an offering to close friends of the Laws Whiskey House Village. Early in Laws’ history, the brand’s loyal supporters purchased Origins barrels, and in turn, Al Laws invested in developing the distillery. As the company grew, he decided to repurchase a handful of these barrels, and continue on with the Origins series.

Origins X is comprised of the last four of this series and is the most collectible Laws Whiskey House release to date, on top of being the oldest. This release showcases how the complexity of Laws’ Four Grain Bourbon develops over time, providing a taste of where the distillery’s whiskeys are headed with continued maturation.

“Perhaps, appropriately, for our 10-year anniversary, this Origins X release showcases our past, while at the same time, also opens an exciting window to the future,” says Laws. “It represents ten years of distilling, maturing, and continually improving.”

Best enjoyed neat or with a small amount of water, this release is extremely limited with a total yield of just 804 750ml bottles. Those able to secure a bottle of Origins X will get to sip on something totally unique — the evolution of a brand over ten years. This distinctive whiskey has aromas of dried roses, golden apple, and beeswax on the nose. On the palate, you’ll find flavors of raspberries, brown butter, and eucalyptus, leading to a pleasant grapefruit oil and brine-like finish.

“I hope you enjoy this bottle of liquid history while contemplating the exciting whiskey to come,” says Laws. “Thank you for your continued support of and enthusiasm for our craft.”

In celebration of Laws’ 10th anniversary, the distillery will also be giving away a portion of the profits from the sales of Origins X to Colorado-based non-profits. The recipient organizations will be selected by employees of Laws Whiskey House.