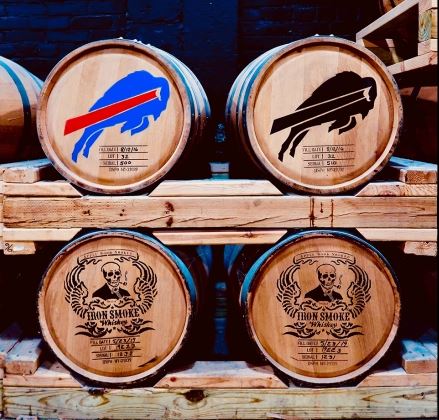 Iron Smoke Distillery has been wanting to open its two oak barrels of Bill’s logo bourbon since 2016.

The distillery started back in 2011, in the backyard over some whiskey and a loaded smoker when our founder and chief trailblazer – musician Tommy Brunett, came up with the concept of combining two great American past times: great bourbon/whiskey making with an added subtle hint of Applewood BBQ’s smoked goodness.

Our internationally acclaimed NYS farm distillery in Fairport, NY is where the magic happens.

“It takes a village to make a bottle of bourbon, and it takes a village to win a Super Bowl,” Brunett said, “It’s not just the players, it’s the people all behind them, and the team effort outside of those guys that you just see throwing and catching the ball.”

The Buffalo Bills played in a record-setting four straight Super Bowls in the 1990’s but lost each of them.

To water or not to water, that is the question