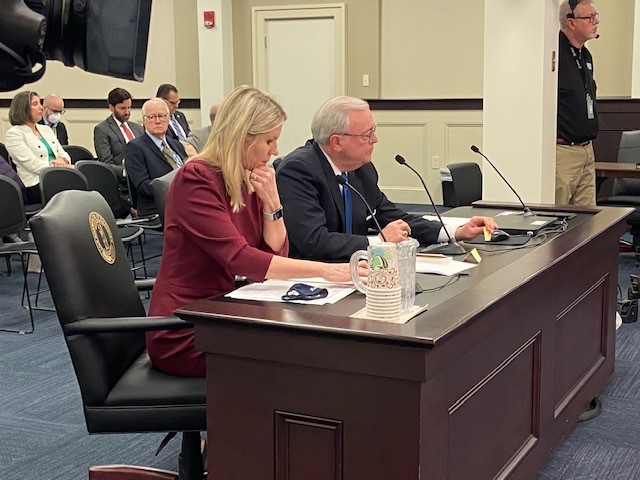 FRANKFORT, Ky. —  Chief Justice of Kentucky John D. Minton Jr. presented his Salary Parity Plan, which is the focus of the Judicial Branch budget request, to the House Standing Committee on Appropriations & Revenue today at the Capital Annex.

“For 14 years – since my early days as chief justice – my top priority has been to invest in the elected officials and non-elected employees who carry out the critical work of the courts, “Chief Justice Minton said. “My goal has always been clear: Our salaries must be competitive with the other branches of state government so that our dedicated employees are fairly compensated, and we have a level playing field in attracting and retaining high-caliber talent.”

He said that Judicial Branch salaries are estimated to be about $6,500 to $7,500 or 15% to 20% less than those in the Executive and Legislative branches.

“I believe we can all agree that it’s simply not rational for Judicial Branch compensation to lag so far behind the rest of state government,” Chief Justice Minton said. “But starting today – with this discussion – we can move quickly toward a remedy that will significantly close this longtime gap.”

The proposed Salary Parity Plan would provide a flat $10,000 salary increase for full-time positions and $5,000 for part-time positions. The plan would apply to all non-elected employees and all elected justices, judges and circuit court clerks.

Chief Justice Minton explained why he is asking for a flat increase instead of a percentage increase. “Nearly 82% of Judicial Branch employees are in grades 7-11 with starting salaries of only $23,604 to $30,936. A 5% or 6% increase for these employees would amount to only about $1,500 a year, which isn’t enough to keep up with inflation, much less improve quality of life and provide an incentive to keep working for the courts.”

He said the Judicial Branch is struggling to retain qualified candidates for non-elected positions because of low pay and the turnover rate is alarming. “We’re seeing turnover at about 40% annually for urban areas and critical frontline positions, such as pretrial services specialists. We’ve lost over one-third of our workforce – about 1,000 employees – in the last four years. That means one-third of our employees have less than four years of experience with the court system.”

Circuit court clerks, who serve every county and maintain records and dockets for Circuit and District courts, earn on average about $12,000 or 12% to 14% less per year than elected county officials with similar duties.

The other significant request is for $34.9 million in American Rescue Plan Act funds for a comprehensive statewide trial court case management system. This funding would allow the court system to replace an outdated system at risk of failure with a sustainable technology platform to meet future demands.