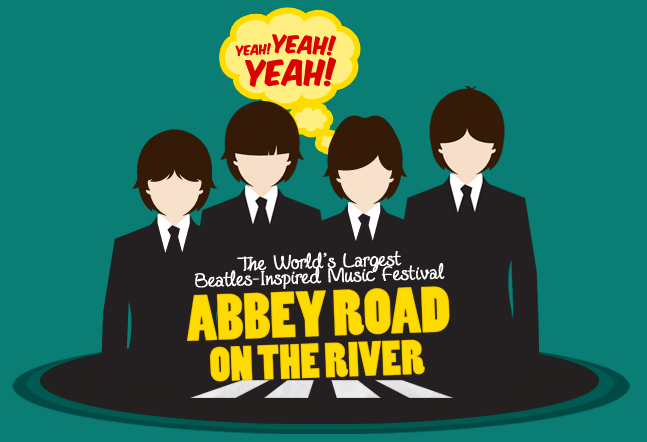 JEFFERSONVILLE, Ind. — Parents and grandparents now have even more reason to twist and shout this Memorial Day weekend. Abbey Road on the River, the region’s favorite family summer kickoff event, has announced free admission for a guest age 20 and under when accompanied by a matching adult ticket. For each adult ticket purchased, a free ticket for a 20 and under guest is included.

Abbey Road on the River, the world’s largest tribute to The Beatles, will celebrate its 20th anniversary this year and feature more than 50 bands including Tommy James and the Shondells, The Cyrkle, and The Fab Four. The festival today released the anticipated 2022 daily schedule online at AROTR.com. Throughout the five-day event, held May 26-30, more than 50 bands will perform 200 concerts on 6 stages.

Unlike many other large music festivals, Abbey Road on the River is the perfect place to let young ones burn off some energy while the adults enjoy live music in a laid-back atmosphere. The festival’s two main stages and viewing areas are located beside the Big Four Station park’s expansive all-ages playground. The park also features ample lawn space and shade, paved sidewalks great for strollers and wagons, and plenty of close parking options. The event offers plenty of food options that appeal to all ages, and event wristbands allow for re-entry so attendees are able to come and go as they please.

“We have always been a family event and seeing families of all ages bonding and enjoying the same incredible music is very special.” says festival producer Gary Jacob. “With the resurgence of post-Covid festivals that we’ve all been waiting for, there is no better time than now to support events and the talented musicians who have waited to perform for all of us.”

Abbey Road on the River first debuted in Cleveland in 2002, then in 2005 moved to Louisville, and then in 2017 crossed the river to Jeffersonville, IN. Over the years, bands such as The Beach Boys, America, Jefferson Starship, The Zombies, ELO II (The Orchestra), The Grass Roots, Felix Cavaliere, Peter Asher and many more have performed at the event to celebrate and honor the music of The Beatles. Close friends and family members of The Beatles who have participated in the event include original drummer Pete Best, John’s sister Julia Baird, George’s sister Louise Harrison, long time secretary to The Beatles Freda Kelly, former Apple Records Exec Tony Bramwell, sound engineer Geoff Emerick, and the inspiration behind one of The Beatles most recognized songs from The White Album Dear Prudence, Prudence Farrow.