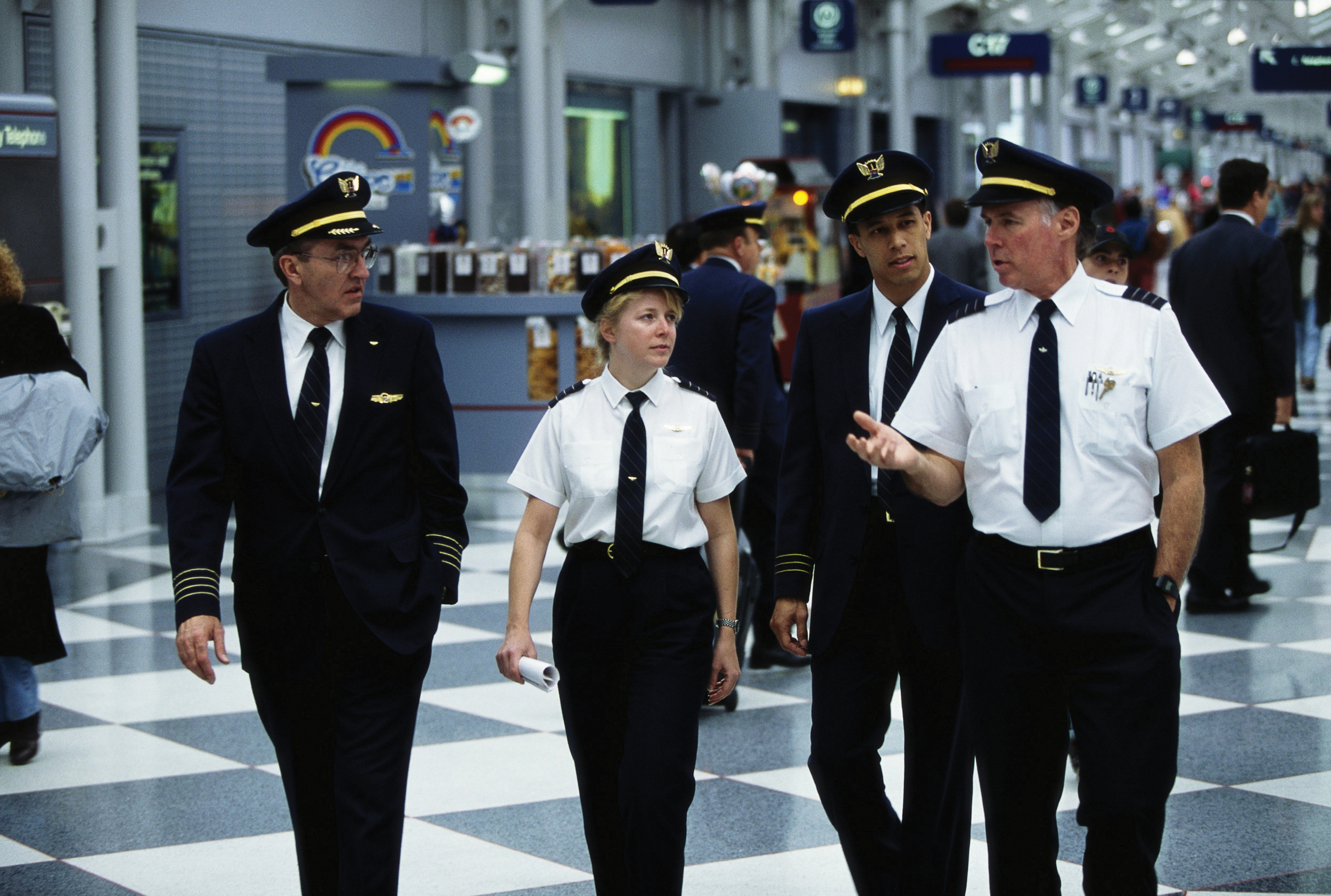 Flying to that Fourth of July vacation destination was a bit tougher this summer than in the years leading up to the COVID-19 outbreak. It may not be much easier next year, and regional air travel services and pilot training schools are feeling the weight even more than the large commercial airlines.

If the growing national pilot shortage is tough on travelers—CBS News reported that 5,300 flights were canceled across the U.S. between June 16-20—it’s also tough on pilots themselves, and flight schools can’t keep up with the demand for more. In a way, it’s a problem that feeds on itself, according to air travel operators and education officials in Kentucky.

Dale Crigger, founder of Kentucky Flight Training School in Louisville, said his company graduates 25 to 30 new pilots per year, a number that is rising due to the shortage combined with more interest in the profession.

But he points out that there’s a caveat: When a pilot or instructor hits their 1,500 air hours, they’re eligible to leave their regional jobs for a commercial airline—and that means it becomes more and more difficult for people like Crigger to keep pilots around and to keep training new pilots at high rates.

“Airlines now are recruiting them at about 1,300 hours,” Crigger said. In fact, one of the major airlines hired one of his instructors at age 19: “You can’t even be a pilot until you’re 21. But they put him on seniority and gave him the benefits.”

That’s right, the big airlines are offering ever bigger bonuses and salaries as they scramble for new pilots. There are other contributing factors as well. For one, noted Dennis Sinnett, director of Eastern Kentucky University’s aviation education program, commercial pilots are required to retire at age 65. Sinnett, age 62 and a career pilot who also flew for the military for 30 years, said the requirement is contributing to the shortage as he and his contemporaries who fly for regional and commercial airlines are starting to age out.

“We’re looking behind us and saying, ‘How are these seats going to be filled?’” he said. “I talk to them, and they are consistently saying ‘This is no joke.’”

Another contributing factor to the nationwide shortage, Sinnett said, is that with the military relying more and more on drones and unmanned planes for the last decade or two, it has produced fewer and fewer pilots. As a result, airlines have had to look elsewhere for pilots; previously, a high percentage of military pilots would immediately turn to the commercial airlines for employment once their military service ended.

Sinnett said his understanding is that each of the major airlines is somewhere between 1,500 and 2,000 pilots short of what is needed to maintain consistent service. This is partially why American Airlines cut service to three regional airports in late June.

In addition, available pilots are being scooped up by parcel delivery companies like Louisville-based UPS, FedEx and DHL. In fact, those are the jobs even the pilots at Delta and American Airlines covet. 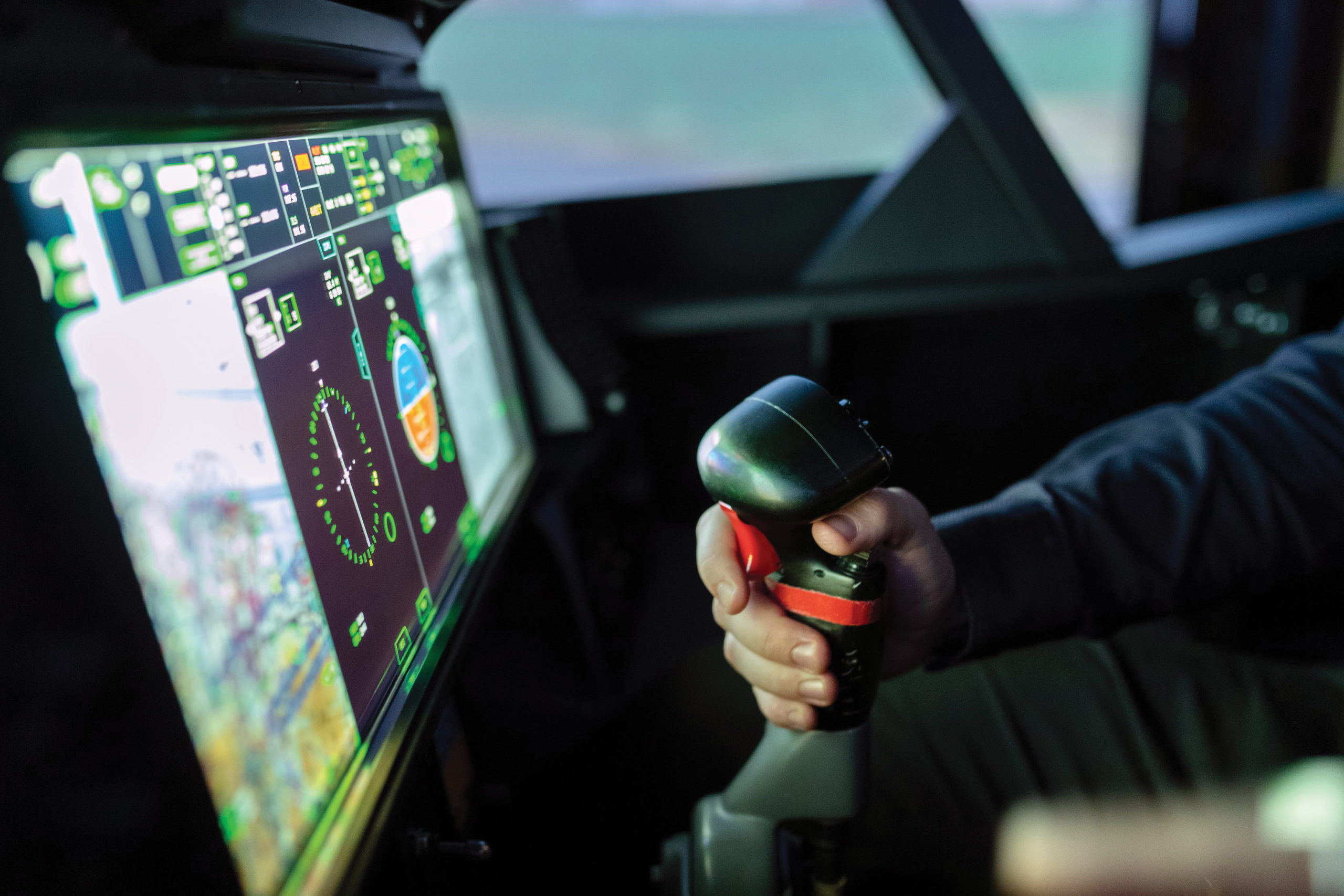 Sharnika Glenn is a human resources director at UPS whose focus is on the company’s pilot force. To put it simply, UPS is virtually unaffected by the shortage. In other words, while your brother-in-law might have his connecting flight canceled on his way to the beach, there’s little chance that’s going to happen to the new earbuds you ordered online.

“We’re still what we consider a ‘destination job,’” Glenn told The Lane Report. “People work themselves through the ranks to get here.”
Pay and benefits are highly competitive, of course, but Glenn said many of the pilots she hires cite the long-term employment aspect and the relative stability UPS offers. For example, as COVID-19 ravaged air travel off and on over the past two years and commercial pilots were regularly furloughed, UPS’ business remained steady.

Dale Gillespie, president of Lexington-based Nexgen Aviation, also noted another factor he believes continues to help feed the pilot shortage: the 2009 crash of Colgan Air Flight 3407 near Buffalo. The crash, which saw the plane fall onto a house, killed 49 people on board the aircraft and one person who was inside the house at the time.

The resulting investigation showed pilot error and led families of the victims to lobby for more stringent regulations. Among other things, this led the FAA to adopt the mandatory 1,500 hours of airtime for commercial pilots, nearly double what it had previously been for captains. This has made it a longer process to become eligible for employment with the larger airlines.

Now, some major airlines are starting their own academies, he said, to help produce their own pilots. Some are lessening requirements on general education. But mostly, they’re poaching the pilots from regional airlines as soon as they hit their minimum requirement of pilot hours. And even though flight training programs are doing their best to ramp up, without pilots to train other pilots, they can only do so much.

Sinnett said the aviation program at EKU is the only four-year program in Kentucky and is also the only university-affiliated program. Many lenders won’t offer loans to would-be aviation students unless they are going to a university program, which creates another barrier for many. But EKU is trying to do its part.

Sinnett notes that while the majority of the roughly 320 aviation students at Eastern Kentucky are training to become pilots, a percentage of the program is based in aviation-related management. Those students won’t ultimately be in the cockpit but will instead be taking care of operations on the ground when they move on to their professional careers.

While most of the students who come to Crigger have had a long-standing interest in aviation, some simply see opportunity in an industry hungry for pilots. Still, many people simply never consider becoming a pilot as a career option. One woman reached out to him for information on flight training, and when he asked how she heard about the Kentucky Flight Training Center, she responded, “TikTok.”
Crigger’s company, however, doesn’t have a TikTok account. She explained that she saw a TikTok video of a woman and her daughter flying to a restaurant in another location and flying back that afternoon.

“’I didn’t realize normal people could do this,’” the woman told Crigger. “’I thought you had to be something special to be able to fly.’

“It got me to thinking,” said Crigger, “that many people don’t realize that’s an option for them.” 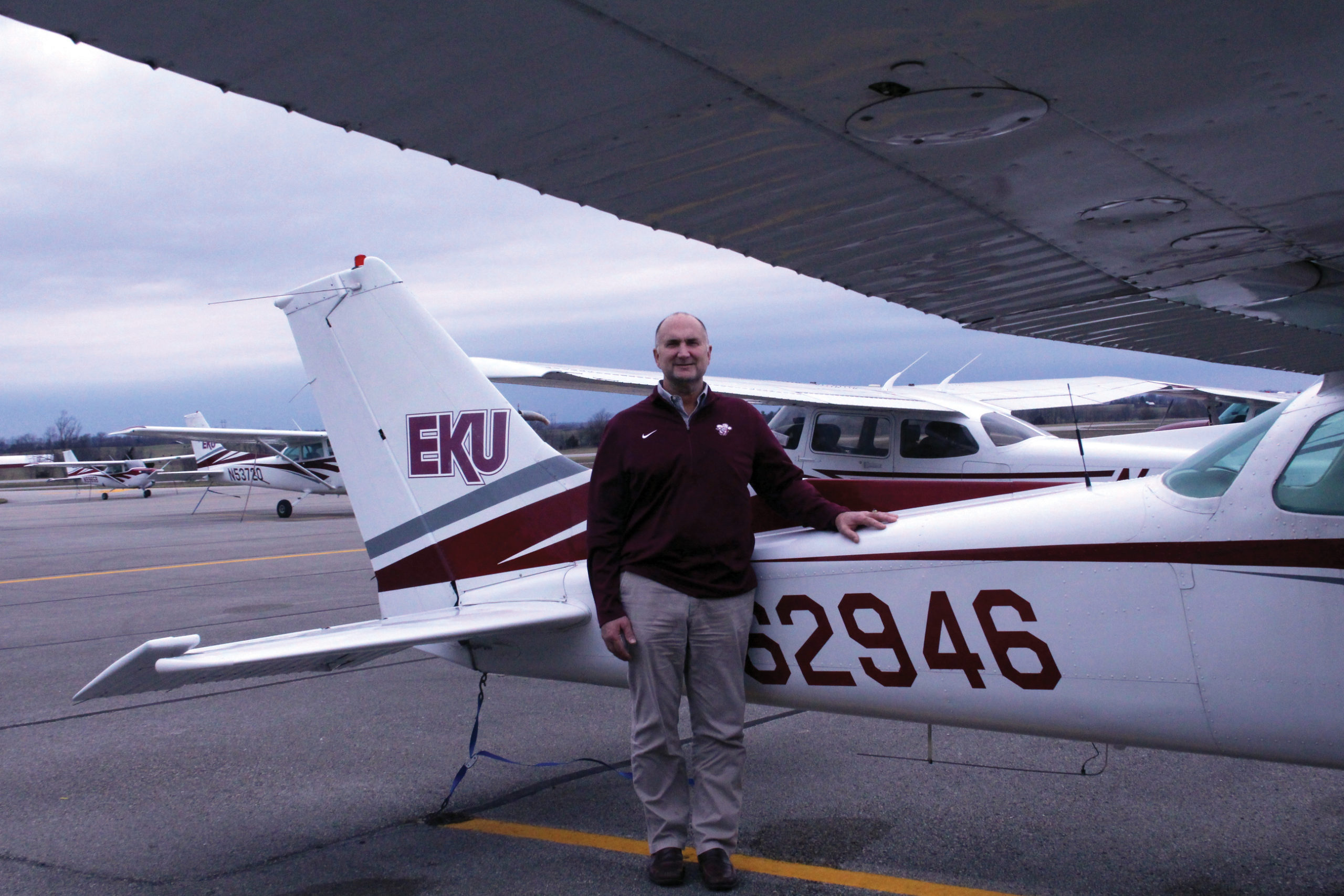 Preparing for the future
The pilot shortage is perhaps beginning to change that perception as more attention is paid to its effect on air travel. But even with flight training schools ramping up enrollment, there’s little relief on the horizon. According to a report by the U.S. Bureau of Labor Statistics, employment of airline and commercial pilots is projected to grow 13% between 2020 and 2030, faster than the average for all other occupations. The Bureau’s projection is that the industry will see an average of 14,500 openings for airline and commercial pilots each year over that time period.

Aerospace manufacturer Boeing projects that over the next 20 years, 612,000 new pilots, 626,000 new maintenance technicians and 886,000 new cabin crew members will be needed to fly and maintain the global commercial fleet.

UPS is promoting outreach to help bring the industry to the forefront for potential pilots of the future. It hosts the ACE (Aerospace Career Education) Academy, which is a weeklong camp for middle school and high school students that exposes them to the various aspects of aviation, from piloting to engineering. They fly simulators and learn processes, with the hope being those experiences will generate an interest in pursuing aviation as a career.

“There are lot of great things going on and pathways being created to make it easier for people to pursue careers in aviation,” UPS’ Glenn said. “There’s a lot of work being done by commercial and cargo airlines to make sure the younger generations are aware of what those careers are and trying to ignite that fire in them earlier.”

Nexgen Aviation’s Gillespie said the interest in aviation is clearly growing: “There is definitely an uptick. Our flight training is gangbusters. I think everyone knows there is a pilot shortage and there’s going to be a guaranteed job, and they’re paying more than they’ve ever paid.”
Meanwhile, at Eastern Kentucky University, the 320 or so students currently enrolled in the aviation program represents at least double the number of those enrolled as recently as five years ago, Sinnett said.

“The program has grown dramatically the past couple of years,” he said. “We’re real pleased with the quality of student we’re getting. We’re excited about the opportunity to try to serve the state of Kentucky, and for them to reap the benefits.” 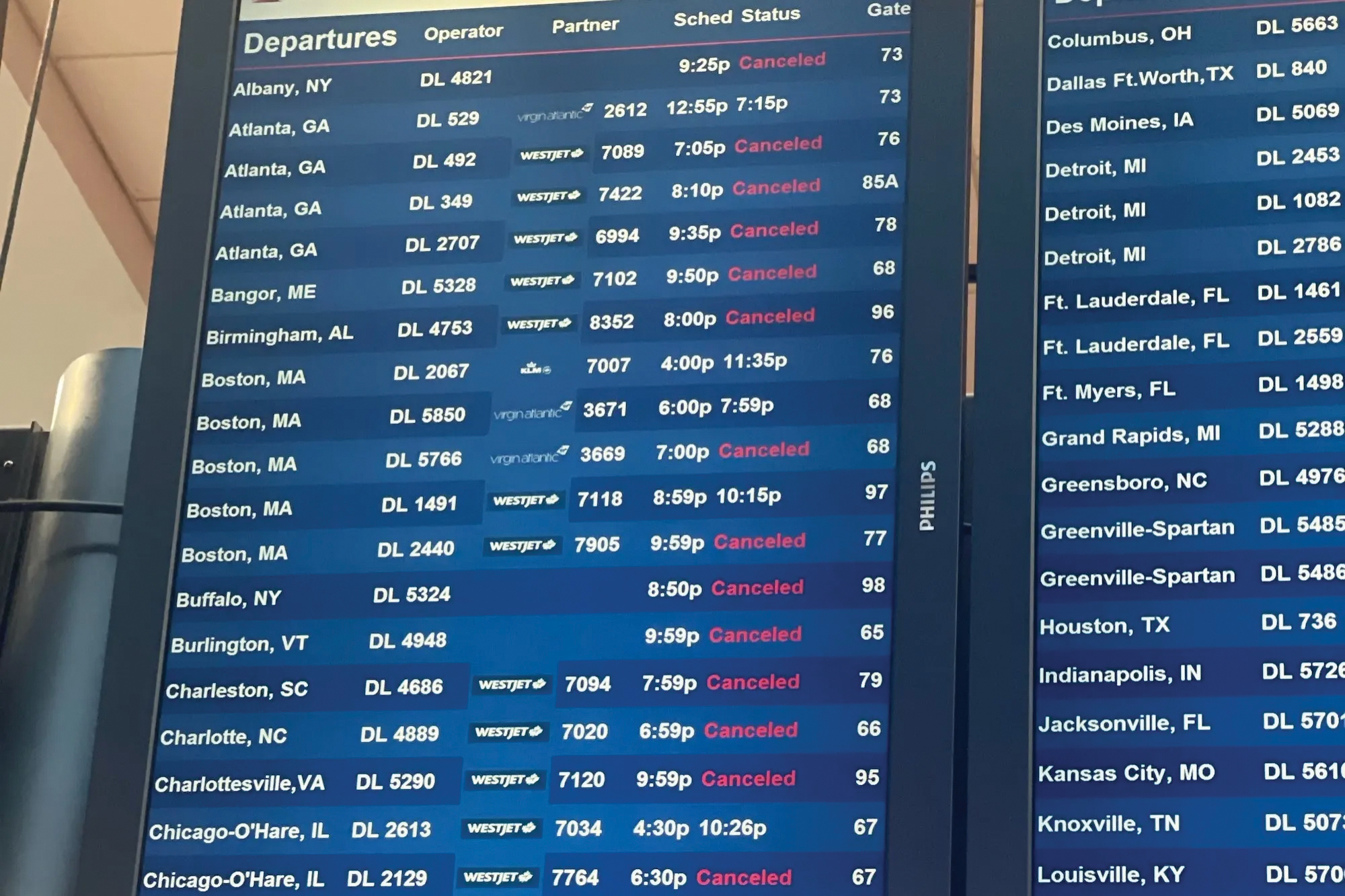 But for the near term, travelers should expect to flight cancellations and delays when moving about the country.

“You’re going to continue to see delays and cancellations,” Gillespie said. “The major airlines are taking all the pilots from the regional airlines. You see the problem there, because the regional airlines are the ones who feed the hubs to the major airlines. Each trip you book, you have to look at if there’s a stop involved. If there is, that’s a potential disruption. You might consider flying out of a hub.”

Banking: How to Get That Loan
August Issue of The Lane Report