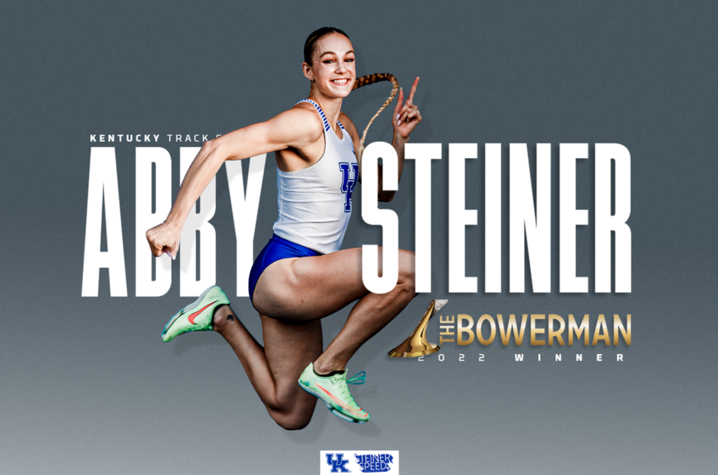 Evaluation for The Bowerman considers indoor and outdoor seasons to decide the best in men’s and women’s collegiate track & field. Having swept the 2022 USTFCCCA Women’s Indoor Track Athlete of the Year Award, the Women’s Outdoor Track Athlete of the Year Award and the Honda Sports Award for Track and Field, it is not surprising that she capped a golden year with The Bowerman. She was one of three finalists alongside Florida multi-event star Anna Hall and California hammer thrower Camryn Rodgers.

Steiner, who came to UK from Dublin, Ohio, is the first Wildcat athlete to win The Bowerman, which was first awarded in 2009. Two other Wildcats, Kendra Harrison and Sydney McLaughlin — both of whom were NCAA champions and future Olympic medalists — were finalists in 2015 and 2018, respectively.

Among the swiftest athletes on the planet, Steiner won three NCAA titles this year. Individually, she swept the 200-meter dash at the indoor and outdoor national championships, setting an American record and second-fastest mark in world history with a blazing 22.09 seconds in the indoor event. Then, in the outdoor 4×400 relay, she turned in one of the most amazing performances in collegiate track history. Taking the baton in the third leg, at least 25 meters behind in fourth place, she blew past the world-class competition. She gave the baton — now approximately seven meters ahead — to Alexis Holmes, who took it to the finish for the Wildcat gold medal.

The statistic that best combines her versatility and amazing performances? She ran in 14 events this year at the NCAA and SEC outdoor and indoor championship meets and earned a medal in all 14.

Also strong in the classroom, Steiner was both the SEC Indoor and Outdoor Track and Field Scholar-Athlete of the Year after compiling a 3.802 grade-point average and earning a degree in kinesiology from UK College of Education. Having graduated summa cum laude in the spring, Steiner turned professional in the summer and immediately made her mark on the world stage. She won the 200 at the USA Track and Field Outdoor Championships, moving on to the World Athletics Championships, where she helped earn two gold medals for the United States as part of the 4×100 and 4×400 relays. (The Bowerman is awarded for the collegiate indoor/outdoor seasons only and professional accomplishments are not considered.)

Listed below are more details on Steiner’s accomplishments.

Steiner earned this honor through consistent collegiate and record-breaking school performances in the 2021-22 season.

During her career, she was a 15-time All-American featuring 11 first-team honors and a four-time SEC champion.

At SEC Championships, Steiner ran in the collegiate record 4x400m relay alongside Karimah Davis, Dajour Miles and Holmes (3:21.93), running a 48.72 split. She also earned silver in both the 100m and 200m.

Shortly before SEC Championships, Steiner ran the then-third fastest outdoor 200m in collegiate history and second fastest in the NCAA during the 2022 season with a wind-legal 22.05 run at the Kentucky Invitational. It was also a school record, meaning Steiner’s name is now tied to seven different program records.

She also played a part in the then-third fastest 4x400m of the collegiate season, with the group of Steiner, Holmes, Davis and Miles, clocking 3:25.79 for a school record in front of Big Blue Nation on UKTF’s Senior Day.

In April, aside from her 22.05 run in the 200m at home, Steiner made history in the 100m in early April at the Joe May Invitational, running the then-fifth fastest 100m in collegiate history at 10.92 seconds, which is a school record she broke at NCAAs.

To top off an excellent start to the outdoor season, Steiner ran the second leg in the current second-ranked 4x100m relay in the NCAA this season, helping the team to a time of 42.46.

Steiner closed her indoor season by defending her NCAA title in the 200-meter dash with a 22.16-second run in Birmingham, Alabama. It was her second-fastest 200m run of her career and second fastest in American history behind her American-record mark.

It was also the fastest women’s 200m in NCAA Championships meet history and broke the Birmingham CrossPlex facility record.

Steiner earned silver in the 60m with a school-record time of 7.10 at NCAA Indoor Championships, which was the highest Steiner has ever placed in the event on the NCAA stage, in addition to leading the 4x400m to a bronze medal.

Steiner cemented her name in American track and field history on Feb. 26 when she ran the fastest American indoor 200m ever and second fastest in world history at 22.09 seconds to earn the SEC gold. This was her third year in a row winning the 200m SEC gold medal and her third time breaking the collegiate record.

The previous fastest indoor 200m in American history was Gwen Torrence’s 22.33 at the USA Championship in 1996.

The national champion is now .22 away from Jamaican Merlene Ottey’s 21.87 indoor world record.

In the 2021-22 track and field season, Steiner earned the following accomplishments:

In addition to her 200m gold at SECs, Steiner also won bronze in the 60m with a time of 7.19 and was a member of the bronze medal-winning 4x400m relay (3:25.89) that ran under the previous collegiate record.

At Clemson in February, Steiner broke the 200m collegiate record for the second time in her career and first time in the 2021-22 season when she ran 22.37 for an event win, gaining sole possession of the record she used to share with Olympian Gabby Thomas.