LOUISVILLE, Ky. (Jan. 13, 2015) — Bert Thin Films LLC, a company originating from the University of Louisville’s Conn Center for Renewable Energy Research, has received a $225,000 grant from the National Science Foundation to develop and commercialize a new material to reduce the costs of manufacturing solar cells. 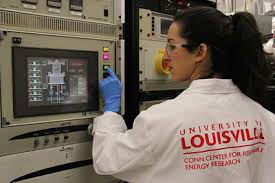 The small business technology transfer grant will be used to support a researcher for the company and a post-doctoral scholar at UofL. The business will work collaboratively to demonstrate the effectiveness and scalability of the new material.

Financial support for the initial work was provided by the Conn Center, where the research began. The second phase was supported in part by an award from the Kentucky Science and Technology Corporation.

Conn Center researchers have filed two applications with the U.S. Patent Office. Bert Thin Films has entered into a license agreement with the University of Louisville Research Foundation to commercialize the technology.

“The grant not only creates two well-paying jobs in Louisville to develop this high technology product, but the support of the National Science Foundation helps us to actively and effectively pursue partners and customers,” said Bert Thin Films CEO Venda Walter.

Bert Thin Films was started in 2014 to commercialize new materials from the Conn Center for solar energy applications. The technology was developed by Thad Druffel, senior research engineer and theme leader for solar manufacturing research and development at the Conn Center, and Ruvini Dharmadasa, a post-doctoral scholar at the center.

The grant includes a sub-contract to the UofL Research Foundation, which will be managed by Delaina Amos, an associate professor in the chemical engineering department.