OWENSBORO, Ky. (April 16, 2015) — The International Bar-B-Q Festival is serious but fun competition with an appetizing invitation. Visitors can sample and take home meat cooked on pits tended by the best cooks around. There’s bluegrass music too, and both activities celebrate Owensboro’s signature attractions. 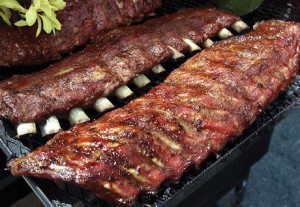 The festival is May 8-9 on the downtown riverfront. A live bluegrass concert is Friday evening; Saturday offers a full day of cooking, entertainment and more.

The 37th annual event is the kick off for a long season of smaller barbecue picnics at the area’s Catholic parishes. The summertime events are deeply connected to Owensboro’s barbecue history. St Mary Magdalene Church celebrates the 100th anniversary of its picnic on June 27.

“Barbecue is uniquely Owensboro and the festival reflects our culture of special food and music,” said Sharon NeSmith, executive board co-chair. “The festival is a fun way to celebrate that heritage.”

What makes this festival unusual are two competition categories. Local grill masters and traveling teams from throughout the nation cook in the Backyard Cook-Off.  On Saturday afternoon festival goers can sample a variety of meats prepared by 50 cooks entered in the contest.

The main event is the Governor’s Cup. Five standout teams with up to 40 cooks each vie for the title. The pits begin glowing before daylight when meats are put on the fire. The barbecue is available for purchase in the afternoon with the winners announced at the end of sales. Chicken is a given and so are two signature foods unique to Owensboro.

Those are slow cooked mutton and a western Kentucky original called burgoo. It’s a hearty stew combination of mutton, chicken and vegetables. Mutton is considered a delicacy and every cook has a secret ingredient.

There will be plenty to go around. Governor’s Cup teams are expected to cook at least 600 pounds of mutton, 400 pounds of pork, 300 whole chickens and 60 gallons of burgoo.

New to the festival are live bluegrass performances that are part of Kentucky’s claim in the Americana Music Triangle. It is a collection of connecting Southern states whose historic genres helped shape the nation’s musical culture.

Performing are Gideon’s Rifle, Sheriff Scott & the Deputies and Blue Diamond. The latter group consists of talented musicians who happen to be Owensboro businessmen. The free outdoor concert is May 8 from 6-11 p.m. at McConnell Plaza in downtown Owensboro.

Everyone can find something fun to do at the festival. There’s a car show, 5k run/walk, arts and crafts, festival foods and activities for children. The BBQ Fest Rockin’ on the River concert begins at 7 p.m. on Friday at the Owensboro Convention Center with a $10 admission. Entertainment starts again at noon on Saturday. A Mutton Glutton pass can also be purchased to enjoy the festival VIP style on both days.