Primary Election is May 19

FRANKFORT, Ky. (April 28, 2015) — In many counties, eligible voters can already cast absentee votes for the Kentucky’s May 19 Primary Election in their county clerks’ offices. All counties will allow eligible voters to cast in-person absentee ballots at least 12 working days before the election. 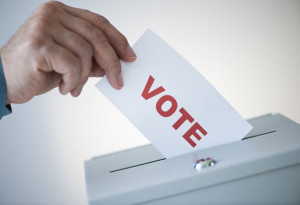 Individuals who may be eligible to vote by in-person absentee ballot include: