Home » LG&E and KU unveils solar plant that will be able to power 1,500 homes

HARRODSBURG, Ky. (April 19, 2016) — Louisville Gas and Electric Company and Kentucky Utilities Company today unveiled a new solar plant in Mercer County that has the ability to power about 1,500 homes. 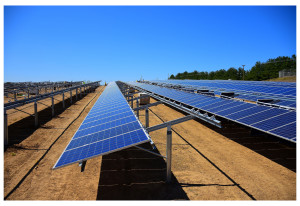 The E.W. Brown Generation Station, Kentucky’s largest solar facility, is projected to produce 19,000 megawatt-hours of energy annually, enough to provide energy for 1,500 homes based on a usage of 1,000 kilowatt hours per month. It is expected to fully operational by June.

“Today marks another step in the evolution of LG&E and KU,” said Paul W. Thompson, chief operating officer for LG&E and KU. “We’re embarking on a new era and introducing a new source of energy to our generation portfolio that will work in concert with our coal, natural gas and hydroelectric fleet.”

The facility will allow the utilities an opportunity to learn more about this technology, including how commercial-scale solar energy is impacted by factors such as cloud cover and how it integrates with the existing generating units.

“Kentucky’s low-cost energy, based on its use of coal, has been the backbone of our economy, bringing manufacturing jobs to the commonwealth,” Environment Cabinet Secretary Charles G. Snavely said. “However, with the uncertainty in our federal regulatory environment, helping advance other sources of energy in Kentucky provides flexibility and makes good sense.”

The new 10-megawatt facility, approved by the Kentucky Public Service Commission in December 2014, stretches across 50 acres of the plant’s property which also includes coal, natural gas and hydroelectric generation. It will consist of more than 44,000 solar panels on fixed-tilt rack systems that will be positioned to optimize the available sunlight for producing energy.

The Atlanta-based division of Amec Foster Wheeler, a multi-national consultancy, engineering and project management company and industry leader in universal solar, is completing its construction of the facility, which will require a peak of about 200 full-time construction workers. The final cost to construct is now expected to be less than the original $36 million estimate.