Home » Confederate monument to be removed from UofL campus

Will be moved to a new location

LOUISVILLE, Ky. (April 29, 2016) — University of Louisville President James Ramsey and Louisville Mayor Greg Fischer announced today that the Confederate monument on Third Street on UofL’s Belknap Campus will be moved to a new location to be determined at a later date. 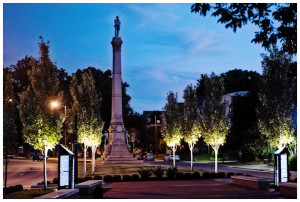 “It’s always important to remember and respect our history, but it’s equally important to reflect on that history in proper context,” Fischer said. “This monument represents our history—a painful part of our nation’s history for many—and it’s best moved to a new location.”

The statue will be held in storage until an appropriate historical location is selected. Leadership in Fischer’s and Ramsey’s offices have been working on the move for several weeks and will be discussing the options for an appropriate historical venue in the near future. While the monument is disassembled, the university will clean and repair the bronze figures and embellishments—something that has not been done since 1895.

Members of the University of Louisville Diversity Committee, composed of students, faculty and staff appointed by Ramsey, listed the removal of the statue as one of their highest priorities to improve diversity and inclusion on campus.

“We are not here to erase history, but we are here to announce that this statue should be situated somewhere more appropriate than a modern campus that celebrates its diversity,” Ramsey said. “Kentucky certainly played a unique role in the Civil War, but it is the culture of inclusion we strive for each day at UofL that will define our future. Over the years, our campus has grown to encircle this monument, which does not symbolize the values of our campus community or that of a 21st Century institution of higher education.”

The statue was gifted to the city by the Kentucky Woman’s Monument Association in 1895 to commemorate the Kentuckians who fought and died for the Confederacy during the Civil War.

Once the statue is removed, the median on Third Street will be replaced with a new lane to improve access to the Speed Art Museum and assist traffic flow around the University. UofL and city officials plan to have the work completed as soon as possible now that students have left the campus for the summer.