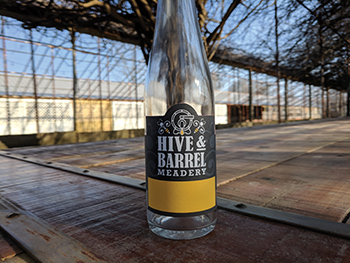 When Hive & Barrel Meadery opens this spring at 3rd Turn Oldham Gardens in Crestwood, it will represent a journey of sorts for co-owner Mike Pemberton.

The mead-maker started out with homebrew beer but became interested in mead in a place where many taste the honey-based beverage for the first time: at a Renaissance festival.

The IT professional’s newfound fascination grew along with the resurgence of the drink in general –  a 2017 report by the American Mead Makers Association showed that on average, a new meadery opens in the U.S. every three days and that 67 percent of meaderies here have been open five years or less.

Between 2013 and 2016, mead was the fastest-growing alcoholic beverage, according to a fool.com report, doubling in production. The number of meaderies in the U.S. is now approaching 500, and Hive & Barrel is part of that growth.

A beverage that dates back at least nine centuries, mead takes on many varieties and can sometimes contain alcohol content reaching near 20 percent – well above that of wine. But its smooth flavor and adaptability to other complementary flavors has it winning over palates.

Early batches at the meadery in Oldham County include maple syrup, peanut butter and jelly, chipotle pepper and traditional honey, with more planned. Label runs began recently, and batches so far have been roughly 50 barrels, so it will be, as Pemberton phrased it, a limited “premium product.”

The complex also features an arm of 3rd Turn Brewery as well as a restaurant called Backside Grill, opening up the possibility for mead-themed special events.

“It’s a great opportunity to do mead dinners,” Pemberton said. “There’s really no limit to what we can do. We’re looking forward to all the options.”