Home » University of the Cumberlands awards $19 million in scholarships 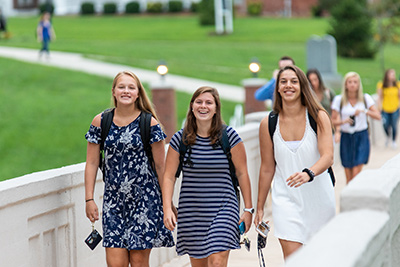 “Affordability is a key component to maintaining a successful institution,” said Larry Rector, director of financial aid. “We work with our students to ensure they are all receiving the best financial aid package possible. It boils down to UC’s mission of making a private college education affordable.”

Cumberlands has kept its tuition rate constant for three consecutive years. During that time, the school has awarded an average of $18.8 million in scholarships to undergraduate students. When combined with federal and state grants, federal student employment wages and the employment wages funded by UC, the undergraduate student body received $31.5 million during the 2017-18 academic year.

The university offers a myriad of scholarships based on merit, academic standing, musical skill and athletic performance. Cumberlands also provides a number of scholarships that are funded by donors to students in a variety of majors.

During the 2017-18 academic year, 160 UC students received UC’s Bert T. Combs scholarship to ensure all tuition and fees were paid.

Each year, almost 50 percent of on-campus students are employed through UC’s work-study program. A typical student employee earns approximately $2,000 per academic year to help them cover college expenses. This year, the university is supplying its work-study program with $1.25 million.

“Besides affordability, another part of our mission is equipping students with work ethics to prepare them for life after college,” said Rector. “Being employed during their college career can teach students motivation, character and purpose. We take care of our students financially while they’re here, but we also train them to be successful adults once they’ve graduated.”

In May, 293 graduates received their associate’s or bachelor’s degrees from UC. According to a recent statistic from LendEDU, a website dedicated to helping consumers understand their financial options, the average student loan debt for Kentucky is $28,078. Under this load, a recent graduate’s monthly payment would be approximately $290.

Meanwhile, for those from Kentucky that were part of Cumberlands’ most recent graduating class, they had an average student loan debt of $20,502. When comparing the average monthly payment amounts between UC graduates and the average debt of Kentucky graduates, UC graduates save almost $100 per month each payment.

Rector noted that the first step to making college affordable is filling out the Free Application for Federal Student Aid (FAFSA). All college students must complete this application each year to receive financial aid. FAFSA forms may be submitted beginning Oct. 1.