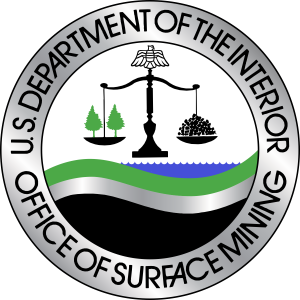 “I congratulate each of the KDAML employees, who through their expertise and professionalism routinely exceed expectations in projects such as this,” Kentucky Energy and Environment Cabinet Secretary Charles Snavely said. “This award is well deserved.”

The Joan Bernat Slide HP AML Project was completed at the historic coal camp town of Hardburly, near Hazard, Kentucky. In May 2016, local residents reported to KDAML that a slide had occurred on a hillside above multiple residences and feared that further movement of the slide would threaten their homes.

Hazard KDAML Emergency Branch personnel expedited a design for a project aimed at re-routing and controlling the drainage above the slide, controlling silt, and improving drainage structures near the homes. The time between the initial complaint to the completion of the project spanned 16 months and brought peace of mind to the residents of Hardburly.

“The Division is very pleased to be honored by OSMRE for this reclamation project,” said Bob Scott, KDAML  director. “The credit goes to a very talented AML design/inspection team as well as a very capable and hardworking Appalachian contractor.”

In FY 2018, Kentucky received $19 million in AML funding from OSMRE.

The award will be presented on Sept. 11, 2018 at the 41st National Association of Abandoned Mine Land conference in Pittsburgh, Pennsylvania.