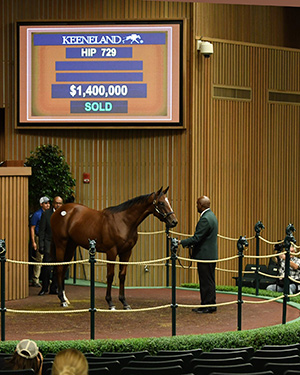 LEXINGTON, Ky. — Robust competition for Thoroughbred racing prospects among a global contingent of buyers continued Wednesday during the third session of the Keeneland September Yearling Sale, where a colt from the first crop of 2015 Triple Crown winner American Pharoah brought $1.4 million and six other yearlings sold for more than $1 million each.

The seven million-dollar sales increased the total number of yearlings sold for seven figures or more through the first three days of the 2018 September Sale to 20, eclipsing last year’s total of 13 for the entire auction and marking the highest number since 2007.

“The session started very strong and certainly ended with a bang,” said Keeneland Director of Sales Operations Geoffrey Russell, referring to the four horses that brought more than $1 million near the end of the day. “There is a diversity of buyers regarding those who bought the million-dollar horses and regarding where they are from geographically. There is international and domestic money at the top, which is very good for our industry.”

“I think this year’s crop might be a little better than last year’s crop,” Russell added. “The market this year has seen better-quality horses come through, and these buyers are willing to stretch (their budgets) for them. We are fortunate that the top consignors in the world bring their horses to Keeneland.”

Larry Best’s OXO Equine purchased Wednesday’s highest-priced yearling, who was consigned by Sierra Farm. The colt is out of the multiple Grade 2-winnng Pulpit mare Bsharpsonata, purchased by Sierra for $375,000 at Keeneland’s 2016 November Breeding Stock Sale when she was carrying the session-topper.

“He was a star from Day One,” Sierra Farm Manager Michael Callanan said. “He came out here to the sale, and he acted like he owned the place.

“I think American Pharoah is going to be the next (great stallion); he has an unbelievable mind and was a great athlete. This colt handles everything so easy. We brought him in the back walking ring at the sale. He’s never seen anything like that, but he just goes and does his job.”

“I felt like I was empty without (an American Pharoah) colt,” Best said. “I wasn’t sure I was going to find an American Pharoah colt that I liked, but I liked this one enough. Paid more than I thought I would have to, but the underbidder was one that I respect so I’m comfortable with the decision. Still, it’s required that you hope and pray that they can run.

“It’s a gut-feel. Just looked like a horse I should own.”

Shadwell paid $1.2 million for a War Front filly bred by Mandy Pope’s Whisper Hill Farm. Consigned by Timber Town, agent, the filly is out of the Group 3-placed Galileo (IRE) mare Betterbetterbetter (IRE) and from the family of Irish highweights Yesterday (IRE) and Quarter Moon (IRE).

“She’s a lovely filly and we’re excited Shadwell got her so she got a good home,” Pope said, adding she was confident the filly would sell well. “Hopefully everything will go forward, and she’ll start having stakes babies.”

Pope, who frequently has purchased high-priced horses at Keeneland sales, is enjoying her experience as a seller.

“I think it’s been a very good market,” she said. “We’ve been very happy. We’ve sold five out of six so far with one more tomorrow. We’re happy with all the prices we got so we’re quite happy with the market.”

Shadwell was the session’s leading buyer, spending $5,195,000 for seven horses. Another purchase, at $1.2 million, was a colt by Medaglia d’Oro out of Irish stakes winner Bunairgead (IRE), by New Approach. He was consigned by Taylor Made Sales Agency, agent.

Taylor Made Sales Agency was the leading consignor on Wednesday, selling 25 horses for $8,097,000.

A $1.1 million War Front colt from the family of Racing Hall of Famer Rags to Riches sold to China Horse Club/Maverick Racing, which bought undefeated 2018 Triple Crown winner Justify for $500,000 at the 2016 September Sale.

“He is a big man of a horse with size and scope and uses his shoulder well,” said agent Mick Flanagan of China Horse Club, who signed the ticket. “He looks more like a dirt horse than a typical War Front turf horse.

“He has a pedigree page that draws everybody in. It is one of the best pages in America so to get a little piece of it is fantastic.”

Trainer Chad Brown signed the ticket for the $1.1 million Quality Road colt purchased by White Birch Farm and Three Chimneys. Consigned by Indian Creek, agent, the colt is out of the Mineshaft mare What’smineismine, a half-sister to Grade 1 winner Spring Quality and Grade 3 winner Holiday Star.

“It was a very good result,” Indian Creek President Shack Parrish said. “Every day he got better and better.

“We are (having a good year), (which I attribute to) good staff and an excellent sale manager in Sarah Sutherland.”

“When she finishes racing, she will be a good addition to Godolphin’s broodmare band,” said Anthony Stroud, who signed the ticket. “She is a very elegant, light-framed filly who looks very athletic and Uncle Mo is an excellent stallion.”

Barbara Banke’s Stonestreet Stables spent $1.025 million for a daughter of Ghostzapper who is a full sister to Grade 1 winner Molly Morgan. Woods Edge Farm, agent, consigned the filly, who is out of the Distorted Humor mare Capitulation.

“She’s exactly what most filly buyers are looking to buy, so we’re just lucky the right people got on her and it worked out.”

“She looks the part,” said Banke, who owns Molly Morgan. “She looks like she will be rugged and fast, and we will be happy to take her to the races.”

The September Sale runs through Sunday, Sept. 23, with the final Book 1 session beginning tomorrow at 1 p.m.

No sale will be held Friday. The auction will resume Saturday with the first of the two-day Book 2 beginning at 10 a.m.

The entire sale is streamed live at Keeneland.com.