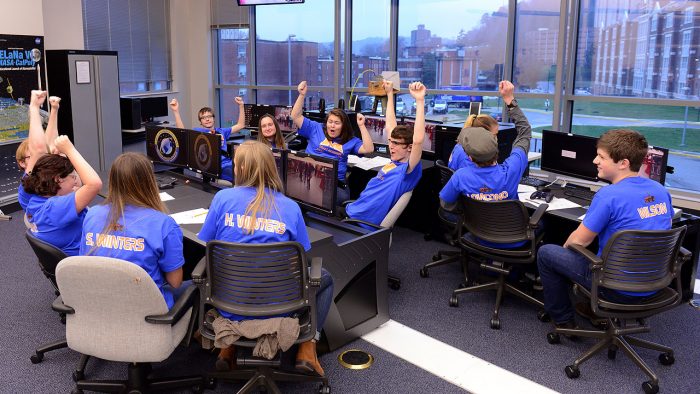 MOREHEAD, Ky. — Students from the Craft Academy for Excellence in Science and Mathematics at Morehead State University had the once in a lifetime opportunity to remotely control a Mars rover Nov. 13.

Through a collaboration with Mission Control, a space exploration and robotics company operating out of Carleton University’s accelerator for entrepreneurs, 11 students from the Craft Academy who are currently taking classes in robotics, remote sensing, space science, computer programming mathematics and physics, had the chance to control the rover, which is located on the Carleton University Campus in Ottawa, Canada.

Craft Academy students were invited to participate in the event as part of a public outreach event aimed at highlighting U.S.-Canadian collaboration in space. The event in Ottawa was attended by U.S. Ambassador to Canada Kelly Craft and NASA Administrator Jim Bridenstine, as well as U.S. Energy, Environment, Science, Technology and Health Counselor John Hill and officials from the Canadian Space Agency.

The students were given a simulated mission and navigated the rover around obstacles based on a 2D terrain map. Jen Carter, assistant director of academic services for the Craft Academy, said the mission gave students an opportunity to face some of the challenges real scientists experience.

“The students learned about the challenges scientists and engineers at Mission Control deal with on real Mars and Lunar missions, including lack of high-resolution maps of the environment and lack of precision landing on Mars,” she said.

For more information about the Craft Academy for Excellence in Science and Mathematics at Morehead State University, visit www.moreheadstatet.edu/craft-academy.

For more information about space science at MSU, visit www.moreheadstate.edu/eass.