PADUCAH, Ky. — The Kentucky Transportation Cabinet has announced that both eastbound and westbound work zone lane restrictions on the Interstate 24 Tennessee River Bridge at the 30 mile marker will remain in place during the Christmas and New Year’s holiday travel period. To help minimize the potential for delays, travelers are advised to consider alternate routes during peak travel hours.

The eastbound and westbound lanes of I-24 in Kentucky are restricted to one lane – with a 14-foot maximum load width restriction – between Exit 27 and Exit 31. 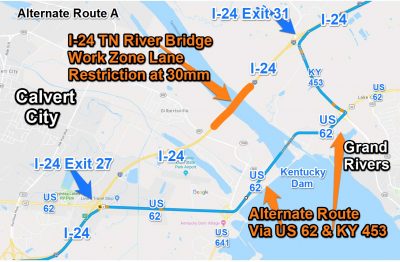 KYTC District 1 Chief Engineer Kyle Poat said a traffic alert released prior to the Thanksgiving holiday helped to keep traffic delays on I-24 to generally less than 20 minutes during the busy travel period. He asks regular commuters and travelers to again use the alternate routes to help reduce delays.

“While our agency goal is to lift work zone lane restrictions during holiday travel periods, maintaining this lane restriction is necessary due to unexpected construction delays during the installation of new joints on the Tennessee River Bridge,” said Poat. “By encouraging area commuters to take alternate routes, we hope to again minimize traffic delays.”

KYTC has sent out a nationwide traffic alert with the hope of reaching truckers and other cross-country travelers who plan to travel I-24 in Kentucky. However, Poat notes that the biggest impact on traffic volume can come from local drivers.

“Most people don’t realize that the average vehicle on interstate highways is traveling about 30 miles,” Poat said. “During the holiday, that average bumps up to about 50 miles. That means local commuters who choose to take the alternate routes can have the greatest impact on traffic volume through this restricted work zone.”

Approximately 29,200 vehicles travel through the work zone on an average day.

The following are suggested alternate routes:

Motorists and commercial drivers are advised to use goky.ky.gov or the WAZE app for real-time traffic activity. Updates on traffic conditions in this work zone and timely traffic advisories for KYTC Highway District 1 are available at www.facebook.com/kytcdistrict1.