The preliminary December 2018 jobless rate was down 0.1 percentage points from the 4.5 percent recorded for the state in December 2017.

The U.S. seasonally adjusted jobless rate for December 2018 was 3.9 percent, up 0.2 percentage points from its November 2018 level, according to the U.S. Department of Labor.

In a separate federal survey of business establishments that excludes jobs in agriculture and people who are self-employed, Kentucky’s seasonally adjusted nonfarm employment increased by 4,500 jobs in December 2018 compared to November 2018. Kentucky has added 21,300 jobs since December 2017, a 1.1 percent employment growth.

“The two surveys used to measure employment trends provided mixed results for December,” said University of Kentucky’s Center for Business and Economic Research (CBER) Associate Director Mike Clark, Ph.D. “While the household survey suggests that employment was basically unchanged from November to December, the business establishment survey showed that firms added 4,500 jobs to their payrolls. Although the surveys often provide a different indication of how employment changed during a given month, they generally show similar trends over time.” 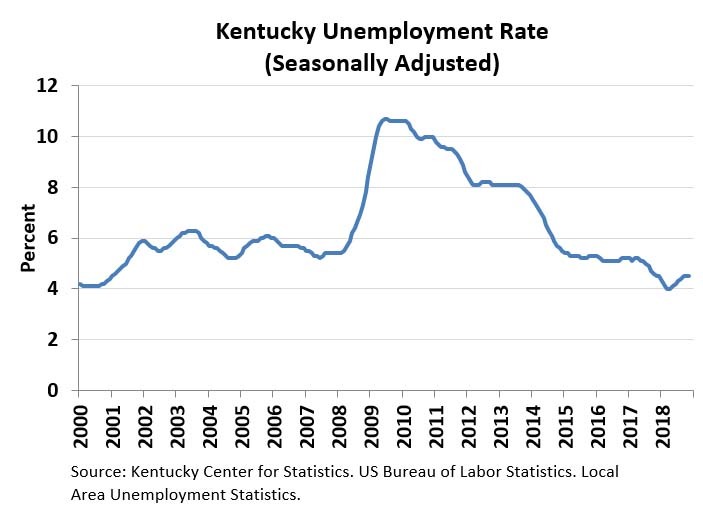 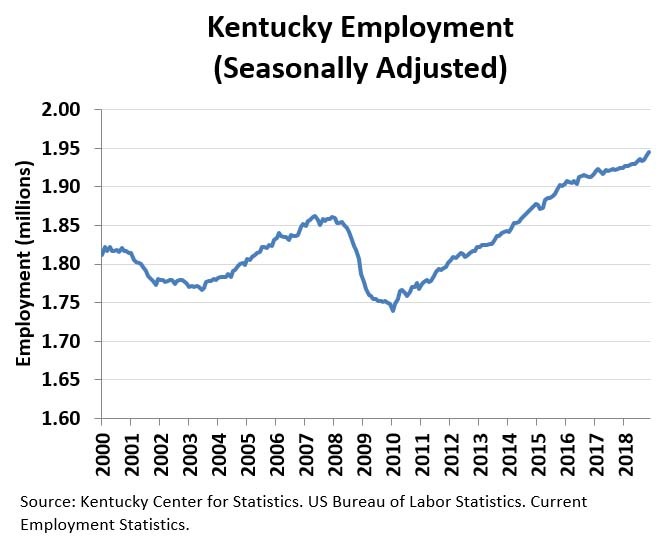 Employment in Kentucky’s professional and business services sector jumped by 2,200 jobs in December 2018 for a gain of 1 percent. This sector is up 6,300 jobs since December 2017. The job gains occurred primarily in the administrative and support and waste management subsector, which rose by 1,800 positions in December. The professional, scientific and technical services subsector rose by 300 jobs and the management of companies subsector added 100 positions.

Construction employment increased 1,600 jobs in December or 2.1 percent. The construction sector is up 2,000 jobs during the past 12 months for a gain of 2.6 percent.

“Kentucky’s construction employment has generally been flat during the past year,” said Clark. “The December increase is welcome news, but growing economic uncertainty may continue to present challenges for construction firms.”

The financial activities sector was unchanged from November 2018 to December 2018. This sector rose by 1,000 jobs compared to last December, a gain of 1.1 percent.

Employment in Kentucky’s mining and logging sector was unchanged in December, but up by 200 positions for the year, a gain of 2 percent.

Kentucky’s leisure and hospitality sector fell by 1,300 jobs from November 2018 to December 2018, a decrease of 0.7. This sector is down 4,400 jobs since December 2017. The accommodations and food services subsector lost 1,100 jobs, and the arts, entertainment and recreation subsector declined by 200 positions in December.

Information services sector lost 200 jobs in December 2018. Employment in this sector is down 500 jobs since December 2017, a loss of 2.2 percent. The industries in this sector include traditional publishing as well as software publishing; motion pictures and broadcasting; and telecommunications.

Phillips in as the new President and Chief Executive Officer of Appalachian Regional Healthcare.

Mayor Fischer: Louisville is strong, well-positioned for the future; and we need to brag!
Morehead State adds new transfer counselor for Southeastern KY