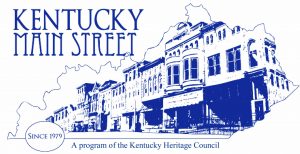 Pikeville and Winchester were the biggest winners with three awards each. Pikeville Main Street won Best Retail Promotion for a wine tasting and “Retail-Gating” event showcasing downtown businesses in a college-themed atmosphere. Pikeville Mayor Jimmy Carter received the Government Spirit of Main Street Award, for his public support of and active participation in local Main Street activities, and John Roberts was named Volunteer of the Year for championing Main Street ideals and raising the local program’s visibility.

Main Street Winchester won Best Main Street Event for its annual Beer Cheese Festival, which was launched in 2009 and drew an estimated 25,000 visitors last year. Clark County Fiscal Court was recognized for Best Rehabilitation Over $25,000 for its rehabilitation of the Clark County Courthouse Clock Tower, and the late Graham Johns received the Spirit of Main Street Award for his leadership as board president and his legacy helping elevate the program to become nationally accredited by Main Street America.

Both Danville and Murray each received two awards. Stith Funeral Home of Danville received the Legacy Business Award for its 90+ years as a family-owned establishment working in and contributing to the community. The Heart of Danville Main Street Program was recognized with a Downtown Beautification Award for commissioning a large-scale mural in the historic district.

Murray Main Street won a Legacy Event Award for its downtown Farmer’s Market, established by the program in 1998, which has grown to include Kids Club activities and partnerships with Kentucky Proud and Community Farm Alliance. The Best Adaptive Reuse Award went to the Swann Building, a circa 1925 tobacco warehouse converted into a mixed-use development housing businesses and apartments.

The Spirit of Main Street Business Award went to Carlson Software of Maysville, which is located in the heart of downtown but serves land surveyors, civil engineers, and construction and mining industries worldwide.

The Main Street Partner Award went to the Kentucky Folk Art Center at Morehead State University, host of the annual Appalachian Holiday Arts and Craft Fair, an event that has provided much-needed financial support to both the center and downtown businesses.

Lifelong Washington County resident Laurie Smith was honored with the Preservation Hero Award for her dedication to the community, serving as the first Springfield Main Street director, supporting rehabilitation of the opera house into city offices, and helping secure grants for local projects in association with the Lincoln Bicentennial.

Kentucky Main Street was created in 1979 to reverse economic decline in central business districts through historic preservation and redevelopment of commercial buildings. For more, see www.heritage.ky.gov.