Home » The Bottom Line: Lawmakers introduce a bill to increase the tax on e-cigarettes 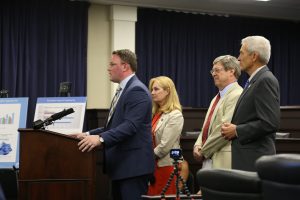 use on the rise, legislators announced support for taxing e-cigarettes at the same rate as cigarettes at a press conference Tuesday.

Rep. Jerry Miller, R-Louisville, said he is sponsoring the bill to raise the tax on e-cigarettes as it is an opportunity to not only improve the health of Kentucky children but also raise money for Kentucky’s desperately underfunded pension system. Miller said this bill could bring in roughly $35 million a year of much-needed revenue, which will go into the state’s General Fund.

The rate of e-cigarette use has doubled among Kentucky high school students and nearly doubled among middle schoolers over the last two years. More than one in four Kentucky 12th graders and one in seven 8th graders used them in 2018.

Rep. Kim Moser, R-Taylor Mill, will co-sponsor the House bill and Sen. Julie Raque Adams, R-Louisville, will champion the bill in the Senate. The legislation will be discussed in the 2020 session of the General Assembly.