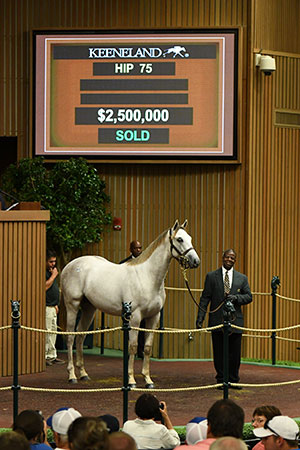 Sheikh Mohammed paid $2.5 million, the highest amount spent on a yearling at public auction in North America this year, for a colt by Tapit who is a half-brother to champion and 2016 Kentucky Derby winner Nyquist. He also paid $2.15 million for a son of Medaglia d’Oro who is the first foal out of Grade 1 winner Tara’s Tango.

Monday marked the first of three sessions of the premier Book 1 of the September Sale. Day 1 saw competitive bidding for racing prospects among the world’s most prominent Thoroughbred owners, resulting in seven yearlings selling for $1 million or more – including three horses who appeared in the ring in consecutive order – versus five horses sold for seven figures each during the opening session of last year’s sale.

“The session was incredible,” Keeneland Vice President of Racing and Sales Bob Elliston said. “The results represent incredible trade and a deep buying bench that was active. The number I am most proud of today is the RNA rate, which was down almost six points to 29%. A lot of folks were trying to get these horses bought and there were multiple bidders, particularly on the top ones.”

The September Sale continues through Sept. 22, with the second of three Book 1 sessions starting Tuesday at noon.

The entire sale is streamed live at Keeneland.com.