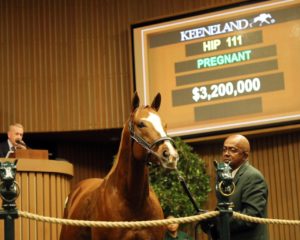 LEXINGTON, Ky. — Keeneland’s 2019 November Breeding Stock Sale concluded today after 12 days of competitive trade fueled by a deep domestic and foreign buying bench. Kicking off the sale was the premier Book 1 catalog of stakes-producing mares, stakes-winning fillies and exceptional weanlings, which delivered 14 seven-figure horses led by the sale of champion Take Charge Brandi, in foal to 2018 Triple Crown winner Justify, for $3.2 million, and generated significant momentum that carried forward to propel total sales to more than $200 million. The November Sale further highlighted the strength of the weanling market by producing the top-priced weanling, a $775,000 filly by Curlin, sold at public auction in North America this year.

“The November Sale continued the trend of robust trade, evidenced by a clearance rate of nearly 80%, and healthy returns that we’ve experienced in recent years,” Keeneland President and CEO Bill Thomason said. “We saw strong participation by major domestic and foreign buyers, and a number of new buyers, who enthusiastically invested in broodmares and weanlings – both long-term commitments – which indicates an optimistic view of the sport.”

The 14 million-dollar-plus horses sold in Book 1 nearly doubled the eight sold last year and represented the highest number of seven-figure horses in the first session of the November Sale since 2011. Leading the way were the aforementioned sale-topping Take Charge Brandi; Grade 1 winner Eskimo Kisses, in foal to Curlin, sold for $2.3 million to Shadai Farm; and Grade 1 winner Callback, in foal to Medaglia d’Oro, sold for $2 million to Katsumi Yoshida.

“Keeneland committed time and effort to strengthen Book 1, and we are very pleased with how it set the stage for solid trade from both domestic and foreign interests throughout the sale,” Keeneland Vice President of Racing and Sales Bob Elliston said. “The market is experiencing an upward draft; people want to buy quality. There is plenty of demand for a good mare covered by an in-demand sire, a young mare or a weanling by a promising new sire.”

Reinvestment in the market was strong and sent a positive signal to the industry. Clarkland Farm and Hinkle Farms were among breeders who replenished their broodmare bands with quality individuals thanks to proceeds from a successful 2019 September Yearling Sale. Clarkland, which sold the September Sale-topping American Pharoah filly for $8.2 million, purchased three mares in November for a total of $1.53 million, led by Fairyland for $700,000. Hinkle, which sold two seven-figure yearlings in September, including a Tapit colt for $2.5 million, returned in November to spend $1,185,000 for three mares, led by the $575,000 paid for Ladies’ Privilege.

“Clarkland and Hinkle were examples of breeders who did exceptionally well in September and were willing to reinvest in November,” Elliston said. “They were buying at the upper end of the market and stepping up the quality of their broodmare bands. It is nice to see those folks reinvest their September Sale success.”

Take Charge Brandi sold in foal to 2018 Triple Crown winner Justify, who was the leading covering sire at the November Sale with 15 mares grossing $11,195,000.

The result of the Elevage Dispersal was the sale of 13 horses for $11.7 million, among them three of the sale’s five highest-priced offerings. Joining Take Charge Brandi in that group was the aforementioned Callback along with Mei Ling, a graded stakes-placed daughter of Empire Maker, in foal to Medaglia d’Oro, sold to Claiborne Farm, agent, for $1.5 million.

“You gotta turn every rock over. You can’t stop working,” Hill ‘n’ Dale’s Director of Bloodstock Services Donato Lanni said after buying Upandtotheright, the highest-priced horse of the 10th session. “I plan on being here right to the end. You never know what you’ll find.”

Japan’s Shadai Farm ranked second among all buyers by gross, acquiring four broodmares and broodmare prospects for $3.6 million, including Eskimo Kisses for $2.3 million from Gainesway, agent. Jane Lyon’s Summer Wind Farm was the third-leading buyer with two purchases for $3.35 million. Summer Wind paid $1.85 million for Lil Indy, dam of multiple 2019 Grade 1 winner Maximum Security in foal to Quality Road, from the Lane’s End consignment, and $1.5 million for Gloryzapper, a Grade 3-winning daughter of Ghostzapper in foal to Tapit, who was supplemented to the sale by Taylor Made Sales Agency, agent, for Aaron and Marie Jones.

Making a splash as the fourth-leading buyer at the sale was newcomer Leopoldo Fernandez Pujals from Spain, who bought 16 broodmares and broodmare prospects for $3.3 million in the name of Yeguada Centurion. Another prominent overseas buyer was Arif Kurtel of Turkey, the sale’s leading buyer by number purchased, who spent $1,717,000 for 59 horses, including multiple Grade 2 winner Catapult, a son of Kitten’s Joy who will enter stud in Turkey. Khalid Mishref, representing Saudi Arabian interests, purchased two of the top-priced horses of racing age: Liam’s Legend for $325,000 and New York Central for $240,000.

Keeneland employs a year-round strategy to recruit buyers from across North America and around the world for its sales. Owing to this ongoing initiative, buyers representing 27 countries purchased horses at the November Sale.

“We’re seeing a change in the international marketplace,” Keeneland Director of Sales Operations Geoffrey Russell said. “For instance, for purely economic reasons there are fewer South American buyers here. We are seeing more support, particularly in Week 2, from Turkey, Saudi Arabia and South Korea. Keeneland representatives visit these and other countries on a regular basis to establish relationships and reap benefits. People enjoy when you make an effort to meet them on their home turf. They appreciate that fact, and they reward us by coming to buy at Keeneland.”

Keeneland accepted supplemental entries to the catalog until the start of the November Sale, and several accounted for top prices in Book 1 and the horses of racing age segments during sessions seven and eight.

Among the Book 1 supplements were Gloryzapper, sold for $1.5 million, and Purely Hot, dam of 2019 Grade 1-winning juvenile Eight Rings, sold in foal to Union Rags to Hugo Merry Bloodstock for $1.2 million.

“Keeneland has the flexibility to accept supplemental entries, and the 25 late additions added great value to the sale,” Elliston said.

A pair of 2-year-olds supplemented to the horses of racing age contingent – Liam’s Legend and Shedaresthedevil – commanded the top two highest prices during the seventh session.

Liam’s Legend, a son of Liam’s Map who won on closing day of Keeneland’s recent Fall Meet and was consigned by Indian Creek, agent, sold to Khalid Mishref. He said Liam’s Legend and Grade 3 winner New York Central, bought for a session-topping $240,000 in the eighth session, would continue their careers in Saudi Arabia and potentially become stallions.

“The racehorse section of the sale is a segment of the market that seems to be very buoyant,” Russell said. “People want horses that can come out of the sale and be ready to run, and that’s where the market was strong. With the April Two-Year-Olds in Training and Horses of Racing Age Sale now on Keeneland’s sales calendar, Keeneland offers two opportunities to bring horses of racing age to market.”

The strong yearling market is reflected in the results of the past two editions of the September Sale, which have produced the two highest gross figures for the sale in a decade. As a result, competition for weanlings at the November Sale from both end users and pinhookers was high. This year’s auction featured weanlings from such exciting first-crop stallions as Arrogate, Classic Empire, Connect, Cupid, Gun Runner, Klimt, Mastery, Practical Joke and Unified.

Larry Best’s OXO Equine was the leading buyer of weanlings, acquiring the two most-expensive foals of 2019 when he purchased a filly by Curlin for $775,000 and a colt by Curlin for $750,000 to lead his total purchases of six weanlings for $3.02 million. Consigned by Indian Creek, agent, the $775,000 filly is out of Fly to the Stars, by Giant’s Causeway, and is a half-sister to Grade 3 winner The Tabulator.

“We knew coming over here that the Curlin filly would sell very well,” Indian Creek’s Sarah Sutherland said. “We had hoped she would top the day. But to be the top-priced foal in North America in 2019? That was great. That was certainly something we didn’t expect.”

“People come from everywhere,” Indian Creek’s Sutherland said about the pool of prospective buyers at Keeneland. “The buyer base is what keeps things going here. For us, the traffic has been good in the barns, and you hope when you come up here you have something that more than a couple of people want.”

“The sales are a great opportunity to take the pulse of horse people,” Elliston said. “There is clearly an understanding within the breeding community that the industry has to take significant action to restore public trust as it relates to safety and integrity, and they are confident the industry will make those changes. They also see positive signs like growth in purse structure nationally and the strengthening of Kentucky’s racing circuit. All of these factors enhance the opportunity to race a horse and make a return on your investment.”

For the third consecutive year and the 23rd time since 1987, Taylor Made Sales Agency was the leading consignor at the November Sale. Taylor made sold 292 horses for $27,511,100. They included the aforementioned Gloryzapper and Purely Hot and two other seven-figure horses, Grade 1 winner Sailor’s Valentine in foal to War Front ($1.25 million) and Bernina Star in foal to Curlin ($1.2 million).

“We at Keeneland thank our consignors and buyers, many of whom travel from all corners of North America and the world to participate in our sales throughout the year,” Russell said. “We value your continued support and wish you the best during the upcoming breeding season.”

Sales season resumes at Keeneland in 2020 with the January Horses of All Ages Sale, which will cover five sessions from Jan. 13-17. The following Keeneland auction will be the April Two-Year-Olds in Training and Horses of Racing Age Sale on April 7.

MetroNet getting new investment from Oak Hill Capital and KKR