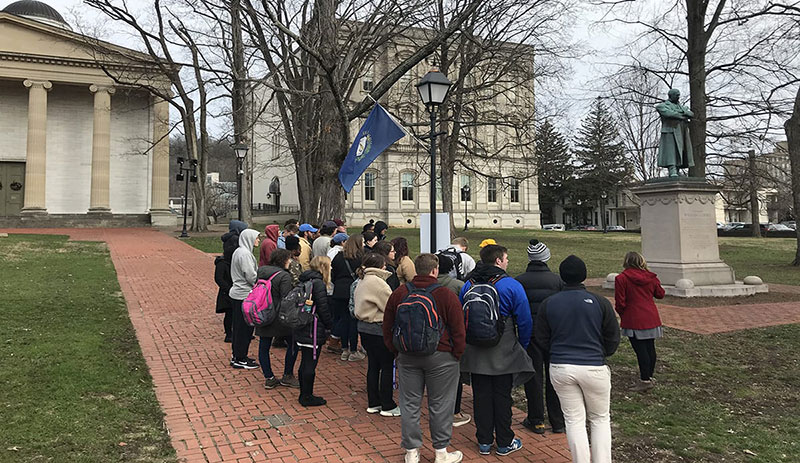 DANVILLE, Ky. — During CentreTerm 2020, Jon Earle, associate professor of history, taught a course titled “Assassins” that allowed 30 Centre College students to explore the history of the idea and practice of assassinations in global history. The outcome of the students’ work was a podcast series and website, titled “Murder, Memory and Martyrdom: The Assassination of Governor William Goebel.”

The course showed how assassinations have worked differently over time and the various motivations that compel activists to orchestrate political murder. Students examined a range of assassins and their victims, including Archduke Ferdinand, Gandhi, Adolf Hitler, Patrice Lumumba, John F. Kennedy, Martin Luther King Jr., Malcolm X and Oscar Romero, among others.

Students conducted their own research on the former governor of Kentucky, William Goebel, who is the only state governor in American history to be assassinated while in office. After 120 years, the assassin’s identity is still unknown.

Throughout the course of the term, students spent 270 hours working in archives throughout central Kentucky to reassess the history and contested legacies of Goebel’s assassination. They incorporated court records, detective reports, eye-witness testimonies, receipts, music, newspapers, telegrams and correspondence between the alleged conspirators, which included Centre alumnus Caleb Powers, who allegedly orchestrated the murder, while serving as Secretary of State of Kentucky.

The six-part podcast series and website show the results of the students’ research. Learn more about Goebel’s assassination and what the research led to here.