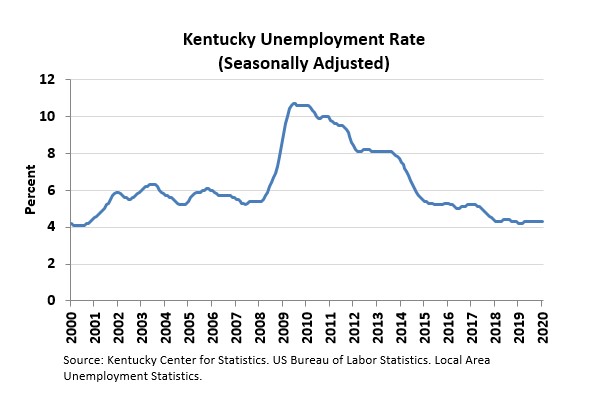 FRANKFORT, Ky. — Kentucky’s seasonally adjusted preliminary January 2020 unemployment rate was 4.3%, according to the Kentucky Center for Statistics (KYSTATS), an agency within the Education and Workforce Development Cabinet (EWDC).

In a separate federal survey of business establishments that excludes jobs in agriculture and people who are self-employed, Kentucky’s seasonally adjusted nonfarm employment increased by 12,100 jobs in January 2020 compared to December 2019. Kentucky has added 6,000 jobs since January 2019, for a growth rate of 0.3%.

“After faltering in November and December, Kentucky’s employment numbers appeared to recover in January,” said University of Kentucky’s Center for Business and Economic Research (CBER) Interim Director Mike Clark, Ph.D. “However, half of the January employment gains came from the retail trade subsector and the administrative and support and waste management subsector, which have been fairly volatile over the past few months.”

Nonfarm data is provided by the Bureau of Labor Statistics’ Current Employment Statistics program. According to the survey, six of Kentucky’s 11 major nonfarm North American Industry Classification System (NAICS) job sectors had employment increases from the previous month, four declined, and one was unchanged.

The professional and business services sector jumped by 4,100 jobs, or 1.9%, in January 2020. This sector was up 4,600 jobs since January 2019. The administration and support and waste management subsector accounted for most of this growth with a gain of 4,300 positions from December to January. The professional, scientific and technical services subsector was up 200 jobs in January and the management of companies subsector was down 400 positions.

Kentucky’s leisure and hospitality sector grew by 3,300 positions from December 2019 to January 2020. This sector is up 7,200 positions since January 2019. The accommodations and food services subsector added 1,700 jobs. Employment in the arts, entertainment and recreation subsector gained 1,600 jobs.

Employment in Kentucky’s educational and health services sector increased by 1,400 jobs in January 2020. The health care and social assistance subsector accounted for most of these additional jobs, adding 1,200 positions from December to January. The educational services subsector was up 200 jobs in January 2020. Since last January, the sector has grown by 6,800 positions, or 2.4%.

Employment in the information services sector fell by 300 jobs in January 2020. This sector was down 900 positions from a year ago. The industries in this sector include traditional publishing as well as software publishing; motion pictures and broadcasting; and telecommunications.

The financial activities sector lost 1,400 jobs in January 2020. These losses occurred entirely in the finance and insurance subsector. Employment in the real estate, rental and leasing subsector did not change from December to January. The sector was down 1,400 jobs compared to last January.