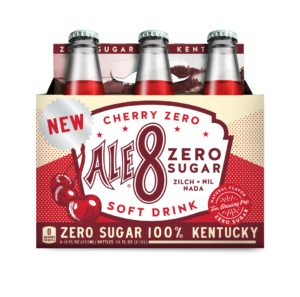 WINCHESTER, Ky. — Ale-8-One has announced that this month the company will launch Cherry Ale-8 Zero Sugar. Building on the success of Cherry Ale-8, which was released in 2018, Ale-8 has developed a Cherry sugar free soft drink to meet the demand of fans who requested it.

Beginning the week of March 9, Cherry Ale-8 Zero will be available in single bottles and six-packs in retail stores in the area of Central and Eastern Kentucky including Lexington, Winchester, Mt. Sterling, Richmond, Morehead, Frankfort and Georgetown.  It will also be throughout Southeastern parts of the state down the I-75 corridor including London and Corbin. Retailers that will carry Cherry Ale-8 Zero include Kroger, Walmart, and Speedway. It can also be purchased on the company’s website.

Cherry Ale-8 Zero contains no sugar, no calories, no artificial colors and no aspartame but does include the secret family recipe developed in 1926 that is present in all Ale-8 varieties. President and COO Ellen McGeeney credits loyal Ale-8 drinkers for this launch and stated, “People have asked for a diet Cherry Ale-8, since the launch of Cherry and we listened. It took us nearly two years and 78 iterations to find the recipe with the great flavor you will taste with each bottle of Cherry Zero. It’s zero sugar, but 100 percent Kentucky, and having a relationship with our fans and hearing them is very important to us and we appreciate their continued support.”