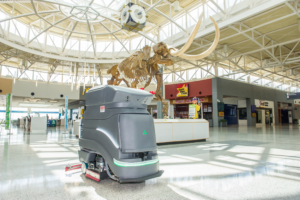 ERLANGER, Ky. — The Cincinnati/Northern Kentucky International Airport (CVG) and Avidbots, a company that brings robots to everyday life to expand human potential, today announced that CVG has become the first U.S. airport to use the Avidbots Neo floor-scrubbing robot. At CVG, the Neo robot has been deployed to autonomously clean floors throughout the Terminal on a continuous basis to ensure a high-quality, healthy experience for travelers.

“CVG is one of the world’s most innovative airports, deploying the latest technologies to deliver the very best passenger experience, so we aren’t surprised they are the first airport in the U.S. to deploy the Avidbots Neo floor-scrubbing robot,” said Faizan Sheikh, CEO and co-founder of Avidbots. “Neo works 24×7 to keep CVG’s facilities spic and span, ensuring a safe and healthy environment for airport visitors, passengers and staff.”

Avidbots Neo is the only fully autonomous floor-scrubbing robot on the market. Neo uses advanced AI, cameras and 3D sensors to adapt to its environment and automatically update its route on the fly to avoid obstacles. Neo operates safely and effectively, avoiding people, suitcases, furniture, displays and other items. Most other floor cleaning robots must be preprogrammed to follow a set route, making it difficult for them to operate in dynamic environments such as airports.

CVG Airport is a leader in deploying innovations that advance the airport industry globally. During a pilot program with Avidbots Neo that began in November 2019, an average of 200,000 square feet of flooring were cleaned per week. Neo can operate six hours on a single charge, so the floor-scrubbing robot also assists in ensuring routine coverage of highly trafficked areas.

“At CVG, we aim to embrace what’s next in all that we do,” said Candace McGraw, CEO of CVG Airport. “Introducing new technologies to elevate the passenger experience is critical to our business. In the challenging and uncertain times we find ourselves, making sure our facilities are safe and clean is our top priority, so Neo has been a great asset to our team to ensure a high standard of cleanliness is met.”

CVG is the first U.S. airport to roll out Avidbots Neo, but the robot is already used in many airports worldwide, including Paris Charles de Gaulle, Singapore Changi, Tokyo Narita, Tokyo Haneda, Osaka Kansai, Montréal-Pierre Elliott Trudeau International, Ben Gurion and Sydney Airport. Because Neo operates autonomously and delivers a consistently high-quality clean, airports are adopting the robot at a rapid rate. In addition, Neo has helped supplement critical maintenance and housekeeping staff, especially at a time when keeping facilities clean has never been more important.