Home » Despite strong start, Ky. is now behind in COVID-19 testing 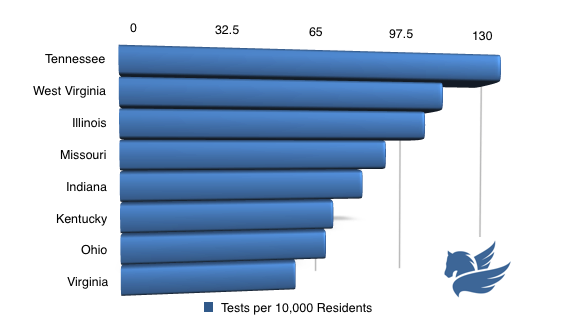 Approximately a month ago, Kentucky was a leader in testing per capita in our region, behind only Illinois on March 21. More recent numbers however show that the state is falling behind considerably, a trend which was notable in the data as early as March 31 and has not improved in the weeks since.

Most comparisons between Kentucky and Tennessee have failed to account for population variables or the considerable difference in the number of tests administered. Such comparisons provide very little benefit to public health officials or policymakers.

On a positive note, of the 29,747 Kentuckians that have been tested and received results 27,318, or 91.8%, have come back negative. Currently, only 477 individuals in the state are hospitalized related to COVID-19 with an estimated 6,210 hospital beds available.

A full breakdown of state by state data can be found here.