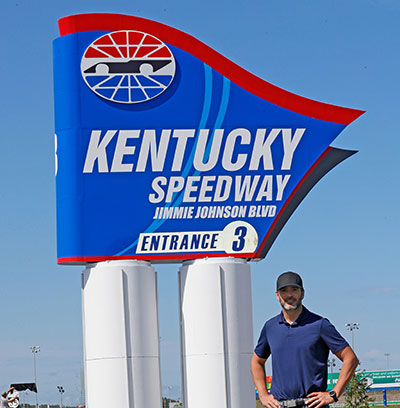 “There are only three seven-time champions in NASCAR history and only one that competed at Kentucky Speedway, Jimmie Johnson,” Simendinger said. “It has been an honor to have him race with us and it is only fitting that he be remembered for decades to come by fans and competitors as they use our main road, Jimmie Johnson Boulevard.”

The track also added special scrim to the fencing along the track infield tunnel that says “Thanks 48”.

The road was formerly known as Jerry Carroll Boulevard for the track’s original founder and developer. Carroll says he was excited when Simendinger proposed to change the road’s name to Jimmie Johnson Boulevard.

“When Mark called me and presented the idea to name the road after Jimmie Johnson I enthusiastically agreed,” Carroll said. “My dream when I built Kentucky Speedway was to bring the best drivers to Kentucky and there have been none better than Jimmie. His legacy in the sport will be rich, and it should be shared with the fans.”

“This is very special to me and my family,” said Johnson. “When I first started with HMS, it felt like I lived at Kentucky testing and getting laps in as a rookie. To think 18-plus years later they would be naming a street after me is surreal and a great honor. Thank you to the Smith family, Mark and his staff and to the NASCAR fans in Kentucky for doing this.”