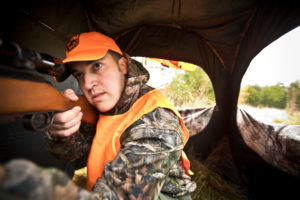 About 300,000 Kentuckians hunt deer each year. The state’s deer herd also draws thousands of hunters from other states throughout the different seasons, contributing heartily to the commonwealth’s tourism industry.

Kyle Sams, deer and elk program coordinator for the Kentucky Department of Fish and Wildlife Resources, said this year’s deer harvest could be one for the record books.

“Hunters in Kentucky harvested 1,637 deer during the opening weekend of archery season, which was a record high,” Sams said. “That pace carried through the month of September when hunters harvested 7,980 deer, also a record for the month of September. If that pace continues, we can expect to surpass the record for total deer harvested in 2015.
Hunters took 155,730 deer during the 2015 season. In 2019, deer harvest numbers came close to that record with a harvest of 148,395 animals harvested. Numbers from early archery season support a strong start to this year.

With the record harvest of 7,980 deer in September alone, this represents a significant jump in harvest numbers compared to the 4,688 deer taken in September 2019.

Kentucky’s modern gun deer season in mid-November is designed to coincide with the peak of fall breeding, known as the rut when deer are more active than usual.

Knowing the right signs to follow when scouting will help increase hunting success. This year’s production of tree nuts such as acorns – a favorite food of deer – is average. Hunters should expect deer to roam less in search of food, especially when compared to last year’s lower crop of acorns.

“The white oak acorns are still the most attractive deer mast,” Sams said. “Deer will go tree to tree eating them up.”

Kentucky is home to more than 1 million acres of public land available for hunting, fishing, and other outdoor activities. To find out more about specific public hunting areas throughout Kentucky, visit the department’s website at fw.ky.gov.

County deer zone assignments are published in the annual Kentucky Hunting and Trapping Guide, available on the department’s website and wherever licenses and permits are sold. The guide also provides information about license and permit requirements, hunter education and hunter orange requirements, bag limits, and legal equipment for deer hunting.

As a safety reminder, all hunters must wear a blaze orange hat plus a vest or jacket during firearms deer seasons. Also, hunters should always be certain of their target and what is beyond it before ever taking a shot.