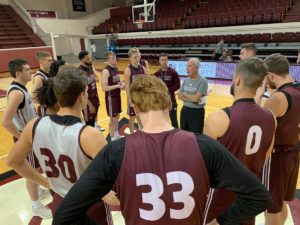 LOUISVILLE, Ky. — As they prepare for their inaugural season in NCAA Division I, Bellarmine University’s men’s and women’s basketball teams announced they will play their home games in iconic Freedom Hall under a multiyear partnership with Kentucky Venues.

Bellarmine’s entire athletics program was elevated to NCAA Division I this summer, with most teams, including the basketball programs, playing in the ASUN Conference. The Knights will now call Freedom Hall – one of college basketball’s most storied venues — their home.

With the COVID-19 pandemic limiting seating capacity for the 2020-21 season, Bellarmine began looking for alternate venues for its home basketball games.

Bellarmine Athletic Director Scott Wiegandt said that “Freedom Hall was a natural choice as it’s steeped in rich basketball tradition and is minutes from our campus.”

“We then saw the obvious benefits of making Freedom Hall a more long-term home for our basketball programs,” Wiegandt said. “It has long been considered one of the best places in the world to watch a basketball game and the venue gives us ample room to grow into our new D-I status.”

The 18,252-seat Freedom Hall can accommodate 2,700 fans this season under Kentucky Gov. Andy Beshear’s recommendation of capping attendance at 15 percent capacity to prevent the spread of COVID-19. By comparison, Knights Hall seats 2,196 for basketball and would have been restricted to just over 300 fans this season.

The Knights men’s and women’s programs will make their Freedom Hall debuts during Thanksgiving weekend. The men’s team will host NCAA D-III Transylvania University on Saturday, Nov. 28 at 2 p.m., and the women welcome Western Illinois 24 hours later. Men’s and women’s ASUN basketball schedules were recently released while the rest of the nonleague schedule will be announced soon.

Bellarmine plans to install a basketball floor that mirrors the one in Knights Hall, which will remain in use for practice and select games. Bellarmine will also add branding throughout Freedom Hall that will ensure players and fans feel at home.

Concessions stands will be open, serving food, alcoholic and other beverages, for a premium game-day experience.

Bellarmine Athletics will offer a range of ticketing opportunities, including season ticket packages and single-game options, as well as suites. Further information on season ticket packages will be sent to season ticket holders via mail and e-mail. There are also plans for designated student seats and tickets. Fans who are interested in tickets, and don’t already have them, may register their interest here.

Located in the Kentucky Exposition Center and operated by the Kentucky Venues, Freedom Hall has completed numerous upgrades recently that will enhance the fan experience, including new lighting in the concourse and arena, renovated suites, a state-of-the-art display on the center-hung digital scoreboard, and a cutting-edge sound system.

Dr. Susan M. Donovan, Bellarmine’s president, said the agreement underscores the commitment Bellarmine made in its strategic plan to strengthen the university’s connections to the region through partnerships and collaboration.

Freedom Hall, which opened in 1956, was the home of the University of Louisville Cardinals for more than five decades, and it has hosted the Final Four six times. The arena also was home to the Kentucky Colonels of the American Basketball Association and was the site of Louisville legend Muhammad Ali’s first professional boxing match in 1960.