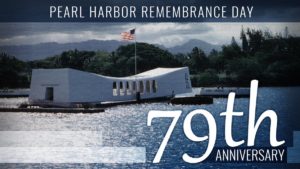 “A date which will live in infamy, the United States of America was suddenly and deliberately attacked by naval and air forces of the Empire of Japan.”

President Franklin D. Roosevelt’s famous words summed up the surprise attack on Pearl Harbor, a U.S. Naval base near Honolulu, Hawaii. The attack occurred on Dec. 7, 1941, just before 8 a.m., shocking the Allied Forces and the United States. The attack killed 2,403 American personnel, including 68 civilians. War was declared on December, 8th.