LEXINGTON, Ky. – Lexington is known around the world for the sport of kings, horse racing. But thanks to a 1983 novel by local author Walter Tevis—and an assist from a hit Netflix series—it’s also gaining notoriety for the sport of queens … and knights … and pawns.

Anyone who’s watched “The Queen’s Gambit” (62 million households and counting) knows that it largely takes place in Lexington. And while it may not have been filmed there, there’s plenty of real places featured. To capitalize on Lexington’s starring role in Netflix’s most-watched scripted limited series ever, local tourism boosters VisitLEX and creative agency CORNETT have partnered with 21c Museum Hotel, interior designer Isabel Ladd and preservationist Lucy Jones to bring to life a meticulously designed boutique hotel room inspired by the show: The Harmon Room at 21c. 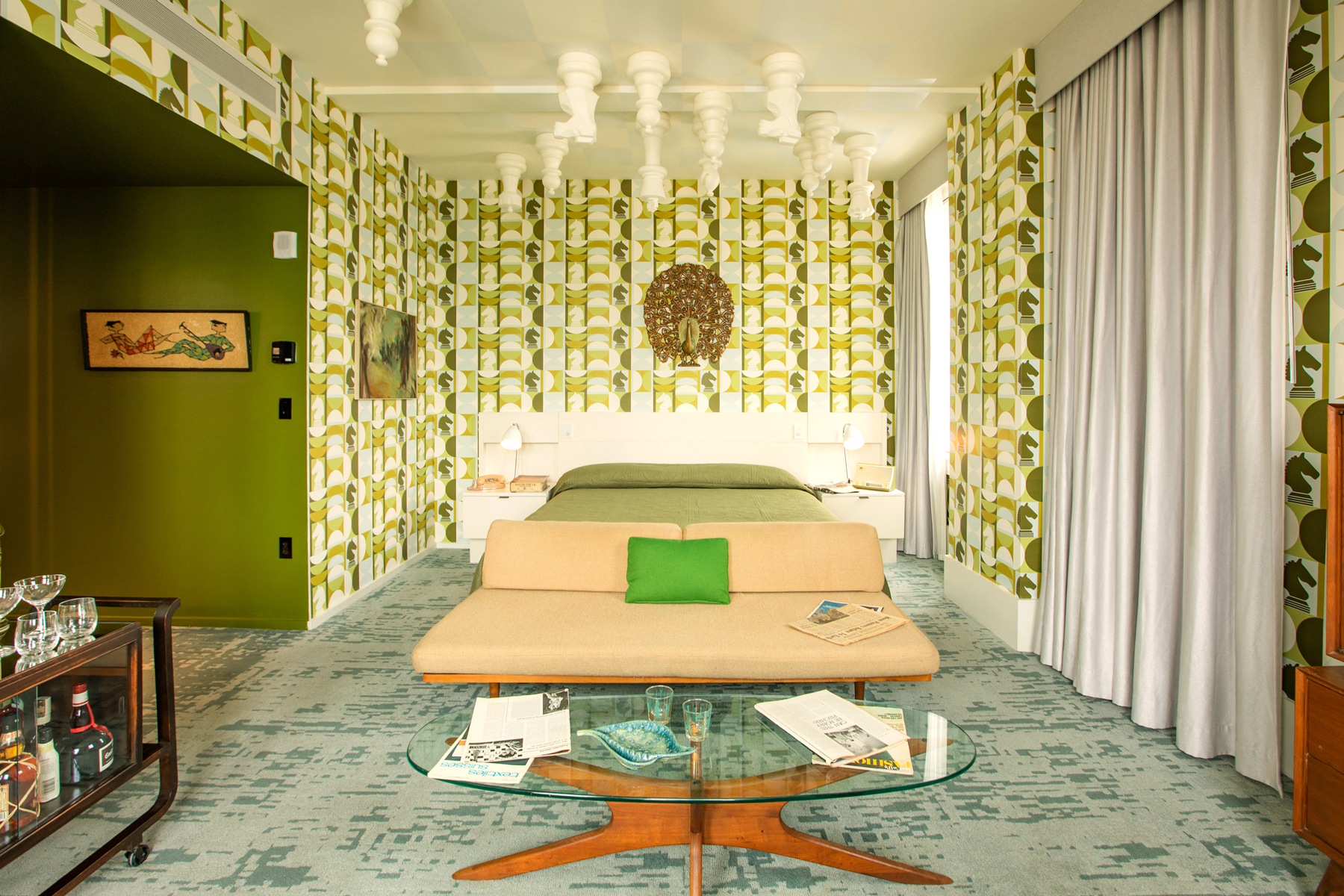 “’The Queen’s Gambit’ put a spotlight on Lexington and piqued people’s interest in our community at a time when we could really use a boost,” said VisitLEX VP of Marketing Gathan Borden. “The Harmon Room and all of the activities we have planned around it are our way of rolling out the red carpet for visitors and another fun example of the way we use creativity to market our incredible city.”

Named in honor of Beth Harmon, the troubled chess prodigy heroine of “The Queen’s Gambit,” The Harmon Room is a time capsule of American mid-century modern design replete with vintage accessories, nods to the show’s most memorable moments and characters, and period furniture from private collectors and local antique shop Scout.

Custom wallpaper in a pattern dubbed “The Knight’s Gambit” was designed for the project by Alex K Mason of Ferrick Mason Inc. And guests are treated to complimentary items like reproductions of the “Lex Liquors” tote bags seen on the show. There’s even copies of Chess Review magazine and rare chess books on loan from local retailer Black Swan Books placed around the room as if Beth Harmon herself were staying for the night.

Of course, no room inspired by “The Queen’s Gambit” would be complete without an actual chess set for its occupants to hone their skills. Available for purchase at the Lexington Visitors Center while supplies last, Lexington nonprofit Iron Bridge Woodshop produced a limited run of handmade walnut-and-maple chess boards for guests of The Harmon Room to enjoy during their stay.

“I have been collecting furniture from that era for the last three decades,” said Lucy Jones, one of The Harmon Room’s designers. “It is pure joy to bring to life the rich scenes from the page and screen.”

Designer Isabel Ladd was equally enthused to join the project.

“When I watched ‘The Queen’s Gambit,’ ” said Ladd, “I would stop and rewind just mesmerized with all the color and pattern play.”

The Harmon Room’s Instagram-worthy centerpiece is an artistic recreation of Beth Harmon’s drug-induced hallucinations, a larger-than-life chessboard installation suspended from the ceiling above the bed in an arrangement inspired by Harmon’s ultimate match with Russian grandmaster Vasily Borgov.

For fans of “The Queen’s Gambit” planning a trip to Lexington, whether they choose to stay in The Harmon Room or not, VisitLEX has created a fun Queen’s Gambit Tour that includes landmarks and attractions from the show, as well as unique experiences that visitors are sure to enjoy. Paired with can’t-miss Lexington adventures like a tour of picturesque horse farms and some of the region’s world-class bourbon distilleries, the Queen’s Gambit Tour is a guaranteed good time in the Bluegrass.