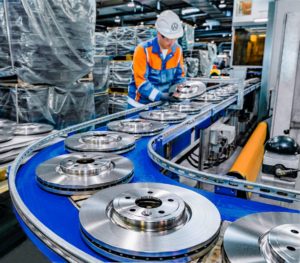 FRANKLIN, Ky. — German-owned Fritz Winter North America announced it is adding a third shift and about 50 jobs to its manufacturing plant in the Wilkey North Industrial Park. The 340,000-square-foot plant, which now operates two shifts and has a workforce of about 280, opened in June 2017, making disc brake rotors for the automotive industry.

The plant’s biggest customers are the Daimler AG plant in Tuscaloosa, Ala., that makes Mercedes-Benz automobiles, and the BMW plant in Spartanburg, S.C. The Franklin plant is also a supplier for brake pad manufacturer Akebono and ConMet, which makes products for the commercial vehicle industry.

The German company invested $110 million to build the plant in 2016 for a 2017 opening. At that time, Fritz Winter executives said a planned expansion could bring the total investment to $194 million and employment to as much as 300.

The Kentucky Economic Development Finance Authority in December 2015 approved Fritz Winter for tax incentives up to $5 million through the Kentucky Business Investment program. The performance-based incentive allows a company to keep a portion of its investment over the agreement term through corporate income tax credits and wage assessments by meeting job and investment targets.

Additionally, KEDFA approved Fritz Winter for up to $690,000 in tax incentives through the Kentucky Enterprise Initiative Act. KEIA allows approved companies to recoup Kentucky sales and use tax on construction costs, building fixtures, equipment used in research and development, and electronic processing.

The Indeed.com employment website has a number of listings for job openings at the Franklin Fritz Winter plant, with pay starting at $16.50 per hour.

Founded in Stadtallendorf, Germany, in 1951, Fritz Winter is a world market leader in the production of cast iron engine blocks and heads, brake rotors and drums, flywheels, and hydraulic housings. It serves the international car and truck industry and specializes in lightweight and material-specific design. The family-owned company began exporting to the U.S. in 1966 and currently employs 3,700 people worldwide.