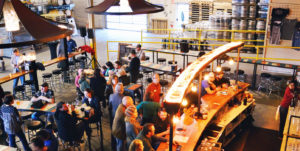 ASHEVILLE, N.C. — North Carolina’s Hi-Wire Brewing plans to expand with the announcement of a sixth taproom coming this summer to the Bluegrass State.

The new Louisville, Kentucky location will be the brewery’s second taproom outside of North Carolina, and it will make Hi-Wire the first out-of-state brewery to open up facilities in Kentucky. With taproom number five opening in Wilmington, N.C. in Dec. 2020, Hi-Wire Brewing currently has four retail taprooms in North Carolina and a fifth in Tennessee, and the brewery’s distribution area has grown to nine states since opening in 2013 with the expansion to Virginia and Indiana in 2020.

This recent growth comes even in the face of the continued pressures of the global COVID-19 pandemic. “Taprooms are a core revenue stream for our company, especially given our current climate. They create brand ambassadors in those markets. They create jobs and increase wholesale sales in the region,” says Hi-Wire Brewing co-owner Bryna Frosaker.

The taproom will be located at 642 Baxter Avenue in Louisville’s Highlands neighborhood, the 5500-square-foot taproom will be the brewery’s first location in a mixed-use development with retail on the first floor and apartments above.  Situated on a street with a number of other bars and restaurants including Louisville’s first dog bar, PG&J’s Dog Park Bar, and Holy Grale.