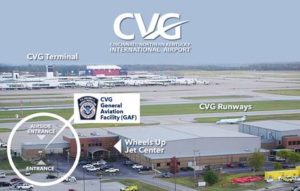 ERLANGER, Ky. — The Cincinnati/Northern Kentucky International Airport (CVG) is now a direct international destination for private aircraft thanks to the opening of a new general aviation facility (GAF) at CVG’s fixed-base operation for Wheels Up Jet Center.

The $1.2 million construction project, led by the airport, is now open and operational. CVG Airport engaged Wheels Up, the current private jet operator, to use an existing portion of its facility for the GAF. CBP will staff and operate in the facility in partnership with Wheels Up.

Cover Story: The Bigger Wins Come Off the Court, Q & A With John And Ellen Calipari
New Albany, Ind. gets new beer pub