Aged for 11 years and 8 months, the extra time in the barrel along with the changing seasons allows for even more distinct notes and layers of flavor to emerge from each individual barrel of Baker’s Exclusive Selection. 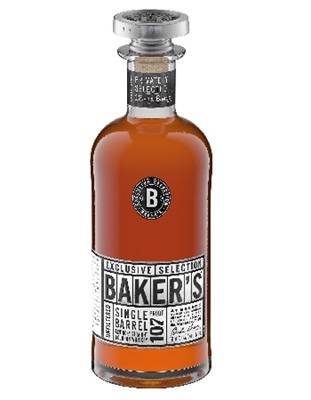 HISTORY
Baker’s Bourbon was created in 1992 by Sixth Generation Beam Master Distiller Booker Noe as part of the original Small Batch Bourbon Collection. Baker’s Bourbon is named after Baker Beam – grand-nephew of Jim Beam and a tenured distiller who worked at the Jim Beam Distillery for 38 years.

Baker’s Bourbon began a new era as an exclusively single barrel bourbon in 2019, becoming as uniquely positioned among the James B. Beam Distilling Co. portfolio as its namesake Baker Beam is in the Beam family.

TASTING NOTES
While every bottle of Baker’s Bourbon offers a unique tasting journey, you can expect a few defining characteristics from the Baker’s Exclusive Selection bottles:

Proof: 107
Nose: Fruit, vanilla, and caramel
Palate: Medium-bodied with flavors of oak, toasted nuts, and vanilla
Finish: Robust flavors sit on the tongue for a while, warm and rounded