NEWPORT/CINCINNATI — The Purple People Bridge – the one-of-a-kind historic landmark that is the only bridge over the Ohio River dedicated exclusively for pedestrian use – turns 150 this year and will celebrate its historic place as a connection between Cincinnati and Northern Kentucky.

“We are thrilled to come together as a region to celebrate the 150th year of this cherished cultural cornerstone,” said Cincinnati Mayor Aftab Pureval. “The Purple People Bridge has connected us to each other and enriched our lives for generations, and we can’t wait to be a part of the exciting history yet to be made.”

The Purple People Bridge connects the communities of Newport, Kentucky and Cincinnati, Ohio together as a safe and well-maintained regional attraction that serves as a historic landmark, people connector, recreational trail, event space, and an iconic community asset that improves economic development and quality of life on both sides of the Ohio River.

From its original days as a railroad bridge, during the years it was used as a mode of transportation for horse-drawn carriages, streetcars and automobiles to its current place as a unique tourist attraction, event venue and recreational trail that is visited by more than 800,000 people a year, the Purple People Bridge stands as a homage to the region’s past and a path to its future. 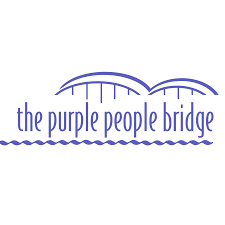 To celebrate the bridge’s historic milestone, a series of events are planned throughout 2022 that will be announced later this month. The Newport Southbank Bridge Company along with the Cities of Cincinnati and Newport are working together to draw attention to the bridge and its significance to our region.

Now that the bridge is fully opened after some emergency repairs were required last year after some stones fell into the river, visitors are encouraged to come and enjoy this safe and well-maintained regional attraction featured as a USA Top 5 Walking Bridge.

The Purple People Bridge has a fascinating history and unique place in the culture of Greater Cincinnati. For instance, did you know?

While celebrating the past, the Bridge’s operators must also look to maintaining the Bridge for future generations.

As a private non-profit company, the Newport Southbank Bridge Company, which owns and operates the bridge, is funded solely by event rental or sign rental on the bridge. Currently, there are zero public funds or tax dollars supporting the operations, maintenance, or improvements of the bridge.