Home » Hospitality: ‘Everybody is Back in Business’ 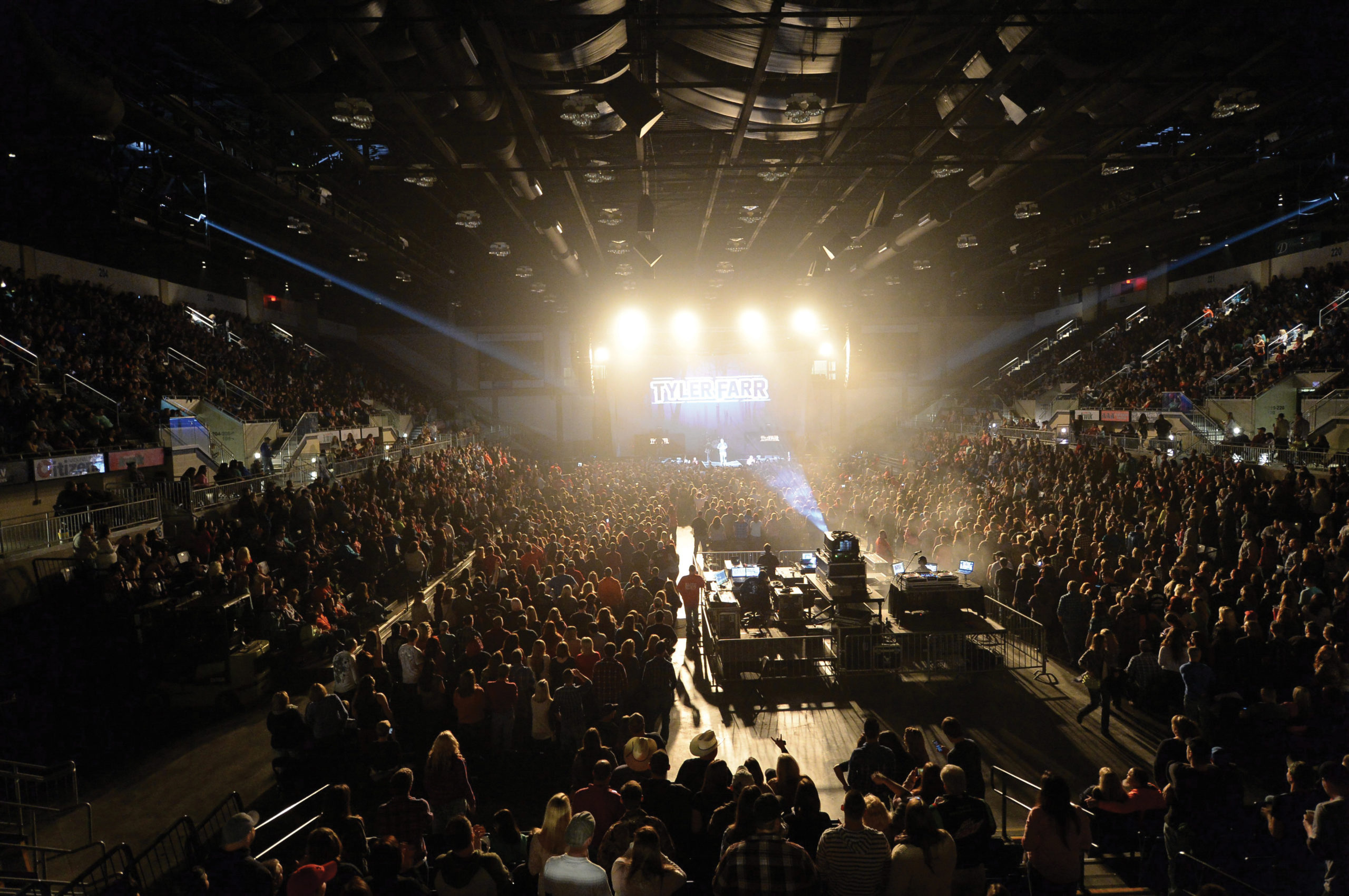 2020 was supposed to be the busiest and best year ever for the 7,000-seat Appalachian Wireless Arena in Pikeville since its opening in 2005.
After 2019, when 17 national acts performed there, “We potentially had 24 (shows) in the planning stages,” said Paul L. Bowles, Pikeville’s executive director of tourism and the arena’s general manager for nearly four years.

Then came an unhealthy plot twist, compliments of COVID-19 and its resulting lockdowns, and suddenly everything changed. The last pre-COVID national act to play the arena was Brantley Gilbert on Feb. 29, 2020, and it was nearly a full year later before Travis Tritt would take the stage on Valentine’s Day 2021.

In the interim, staff had to get creative finding allowable events for the 126,0000-s.f. facility.

“We basically worked under the (safety) guidelines of the state and hosted movies, birthday gatherings and finally high school basketball once they were allowed to play,” Bowles said.

With society adapted to a COVID-conscious reality, event spaces across Kentucky are welcoming patrons back these days, and officials are reporting that pent-up demand from the past two years is bringing them back in droves, ready for a concert, convention or exposition.

Prior to COVID, the Kentucky International Convention Center (KICC) in Louisville underwent a $209 million expansion/renovation project that created more than 200,000 s.f. of exhibit space; a 40,000 s.f. ballroom; a conference theater; and meeting rooms.

The convention center, as well as the 1.2 million-s.f. Kentucky Expo Center (KEC), also in Louisville, are operated by Kentucky Venues. President/CEO David Beck said his facilities compete for 90-95% of the events business in North America.

They’ve largely been successful, he said, thanks to a hard-working team, even landing contracts from groups who’d considered bigger cities like New Orleans, Dallas, Nashville and Indianapolis.

Beck said his goals are to recruit event planners, build on a foundation of excellence and earn repeat business. Feedback is solicited after each event and he’s responsive to improvement opportunities.

“We ask our people every day to work like their job depends on it and make decisions like they own it,” he said.

In Pikeville, Bowles said nearly all the shows that canceled due to COVID have re-booked and new shows have also been announced, though he expects a bit of volatility. 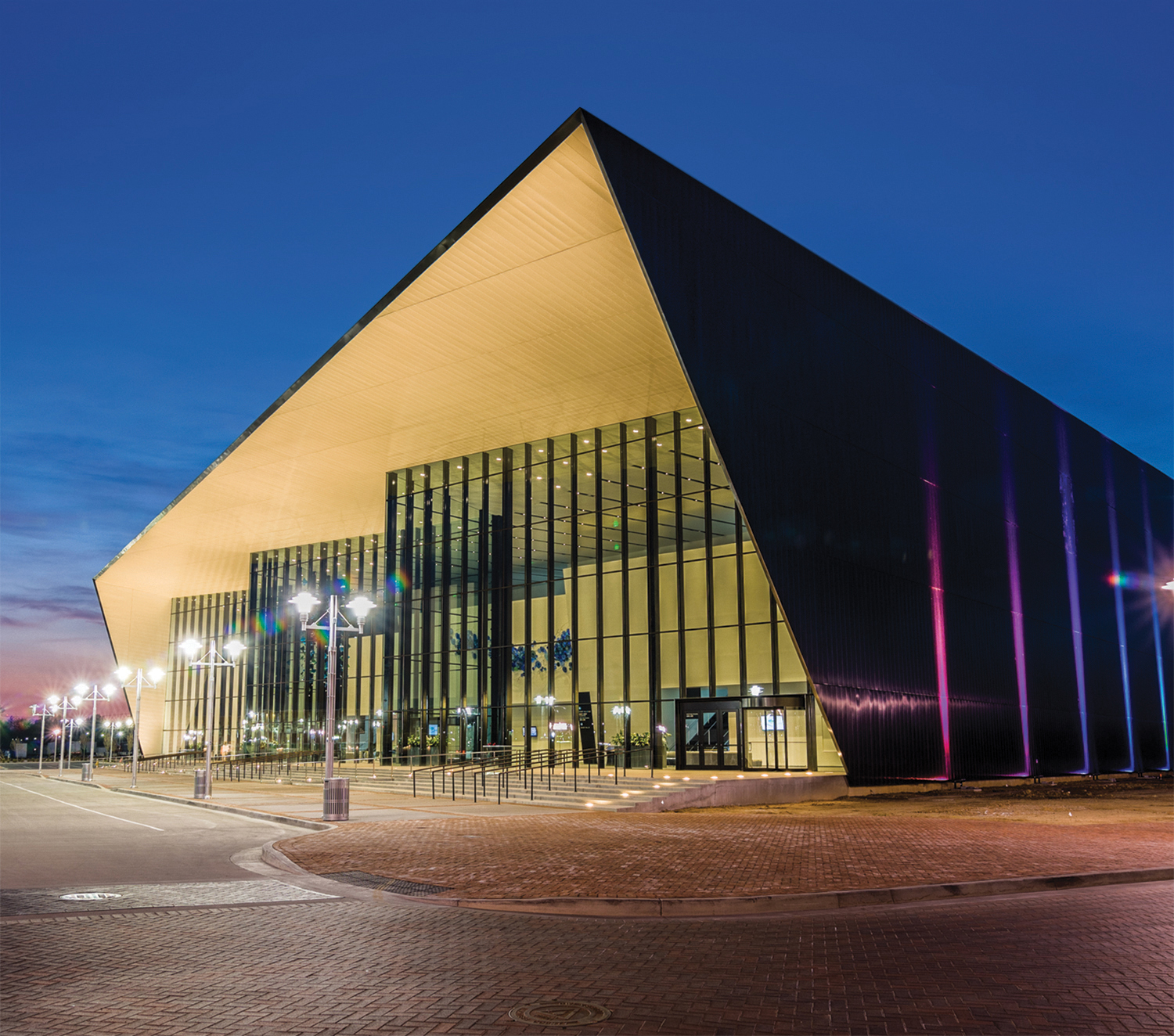 “So far we’ve had a very successful year with some events we normally wouldn’t do,” Bowles said. “For instance, we did the (metal rock) Trinity of Terror tour that normally would not play a building our size. We actually sold out the show in a cut-down configuration. In fact, we have had five sold-out shows since starting back, with four being in 2022.”

Beck, of Kentucky Venues, said these days event planners want facilities with large meeting rooms for speakers, but also smaller rooms where groups can have breakout sessions and network. Their venues can accommodate both.

New business continues to come in, but there are also “legacy accounts” that return year after year, including the Mid-America Trucking Show that’s been in Louisville for 50 years and draws about 60,000. The North America Livestock Show and the National Street Rod Association are other big events held in these facilities.

“We do not want to take (these) for granted,” he said. “We want to treat them just like they’re a new client.”

A gospel event this spring at KICC drew about 12,000, with attendees from 62 nations and every state, Beck said. On average, about 20 events are held per month. The Kentucky State Fair is held each August at the Kentucky Expo Center, and in all there are about 200 contracts in place this year, with others in the works.

That compares to 325 events a year pre-COVID—125 at KICC and 200 at KEC—but it’s certainly an improvement from March 2020, when 26 events were scheduled between the two properties and suddenly all were canceled.

In 2021, bookings were 73% of where they were pre-COVID, and Beck is optimistic about this year and beyond, as health and safety protocols continue for sanitation and disease prevention.

In terms of economic activity, $380 million and $400 million are generated in-state by the two facilities, Beck said, and 68% of hotels in the region are occupied because of their events.

Rupp Arena was part of the project, with enlarged concourses, seating upgrades, and an inviting new architectural façade with more glass.
Joe Fields is director of convention sales and Laura Alexander is vice president of convention center sales and operations for Central Bank Center.

“We’re still coming out of the pandemic but … pace is picking up as people feel more confident,” Fields said of the current convention climate.

Many cancellations from 2020-21 were rebooked and more sourcing is going out for 2023-26, with a pretty solid booking pace, he said.
Alexander said with more space, event planners have a better ability to gather but spread out a bit more for safety’s sake.

As one example, she said, there’s been an increase in sports events in the new exhibit hall space because it has 30-foot ceilings.

Cheer and dance groups, galas and nonprofit fundraisers are returning, Fields said, though crowds may not be as big as they once were. Some customers prefer a hybrid-type event where people can attend on-site while others virtually participate via video conferencing, and those requests are accommodated.

In all, he said, the environment to seal deals with event planners is “hypercompetitive right now—everybody is back in business.”

In the past, events were routinely booked three, four or even five years out, but lately it’s been more like a two- or three-year advance notice, and occasionally as little as a year, said Alexander.

Barring any curveballs, Fields said he feels bookings will continue to be robust. 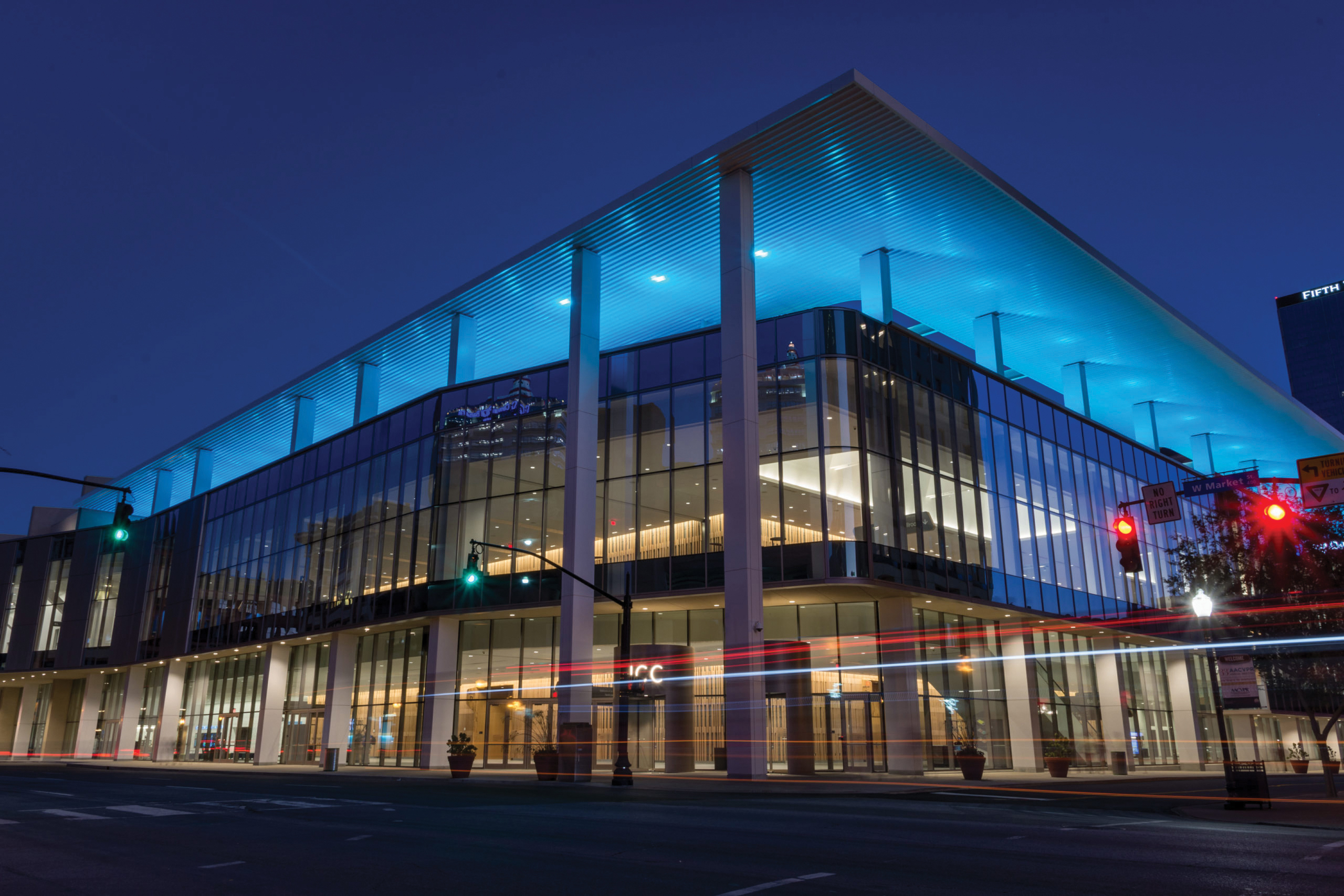 “Our pace is very good, and I think we’re going to have a strong finish to the year,” he said.

With more events in a newer building, Alexander also forecasts a rosy outlook.

“We’ve got a lot of opportunities,” she said. “It’s kind of a fun time to work here.”

At the Owensboro Convention Center and Sportscenter, Assistant General Manager/Director of Finance Jamie Scheffer said there’s been a tremendous overall uptick in bookings this year.

“In the current year, we are forecasting to do 264 events with over 150,000 attendees,” he said. “Last year during the height of the pandemic, we hosted 188 events with about 72,000 attendees. Conventions have seen the greatest increase in bookings compared to last year, where all of our conventions either rescheduled or canceled due to COVID-19.”

He also notices a shorter booking window for his facility, where instead of booking one to two years ahead, conventions are booking in a six-month time frame instead.

The only segment he’s noticed that hasn’t fully rebounded are sizes of weddings and banquets, which he estimates are about 80% of what they were pre-COVID.

But youth sporting events have really taken off.

“We were able to secure several new events due to social-distancing requirements at the client’s old venues,” he said. “Recently we purchased a sports floor, which has enabled us to host sporting tournaments such as futsal, volleyball and basketball. This purchase has really made us stand out and further cement our ability to host a myriad of different event types.”

SKyPAC, the Southern Kentucky Performing Arts Center, is managed by Orchestra Kentucky, which has been around for about 21 years, Kocal said.

He reports things have been pretty much normal for SKyPAC and Orchestra Kentucky since fall 2021.

“Orchestra Kentucky held 11 concerts, which is a pre-pandemic normal,” Kocal said. “No real issues in scheduling concerts or booking artists. One artist tested positive for COVID last fall and had to reschedule to this spring.”

He said average paid attendance per concert is on pace to be a record, as Orchestra Kentucky’s attendance was even on the upswing pre-pandemic.

As it celebrated its 10th anniversary, SKyPAC held 14 presentations with “okay” sales, he said, and two sold-out shows featured comedian James Gregory and contemporary Christian artist Zach Williams. High expense and lack of availability hindered plans to mount a Broadway series this season, but a touring production of “South Pacific” was booked and events like Blippi and Baby Shark rented the facility with strong sales.

BG OnStage, SKyPAC’s resident theater company, had very strong sales for a normal number of events, and Orchestra Kentucky is already scheduled for 11 concerts next season and is in the process of booking or releasing at least 12 additional presentations, Kocal said.

Reed said SKyPAC’s main hall holds about 1,700. Average paid attendance this past season was at a record 81% of house, compared to 30% during the pandemic’s seating restrictions. 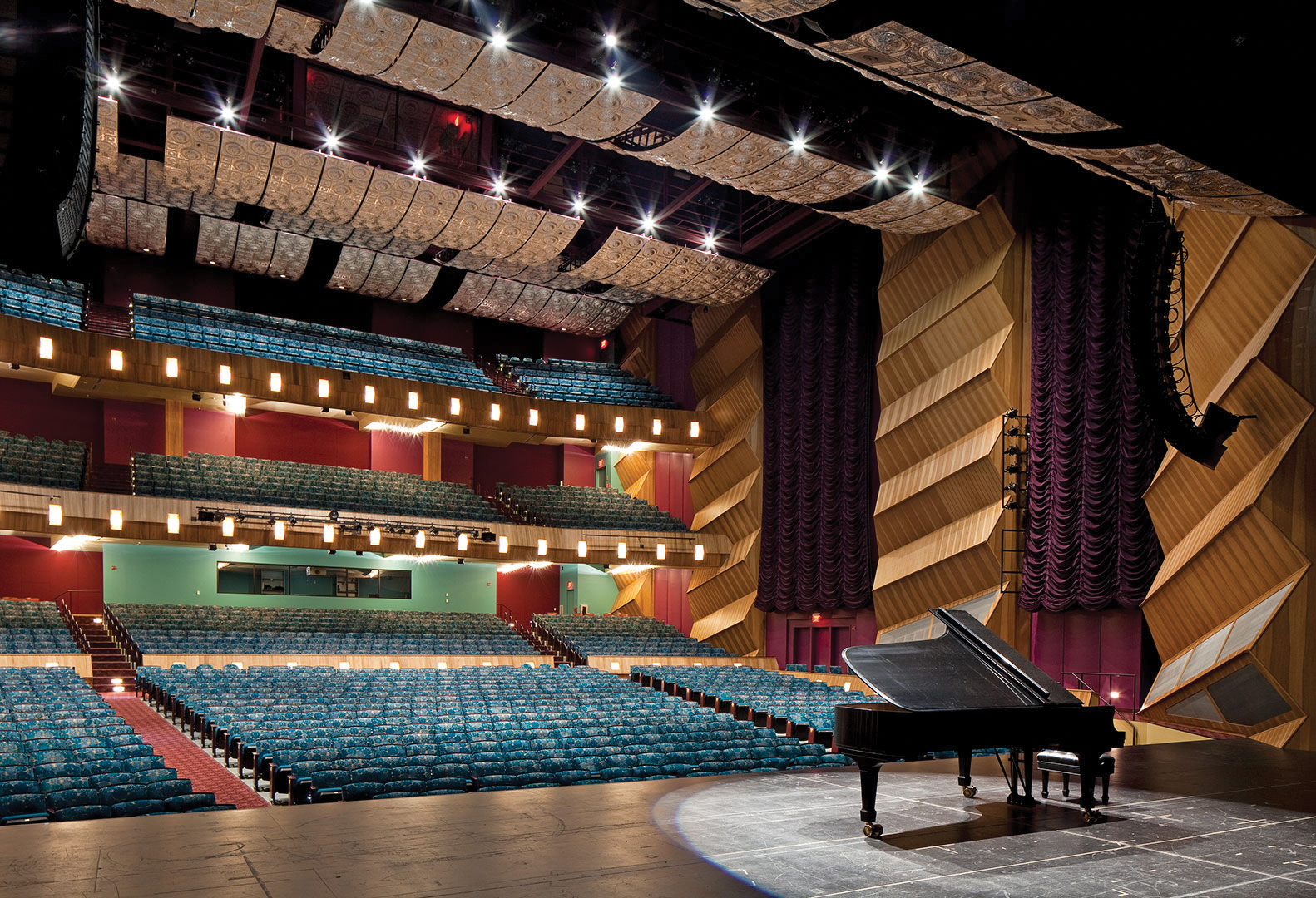 At that time, he said, outdoor concerts were held to continue entertaining in a safer setting. At other times indoors, guests were encouraged to sit in family units for safety, and temperature checks were given. If people didn’t feel comfortable attending, ticket prices were freely refunded.

But for now, crowds are back.

“I think this is an individual decision for everyone,” Reed said. “The scientists seem to indicate that this is here to stay, and I think people need to make a risk-benefit analysis. I, for one, can’t imagine living the rest of my life without live entertainment and that may be a different decision for others.”