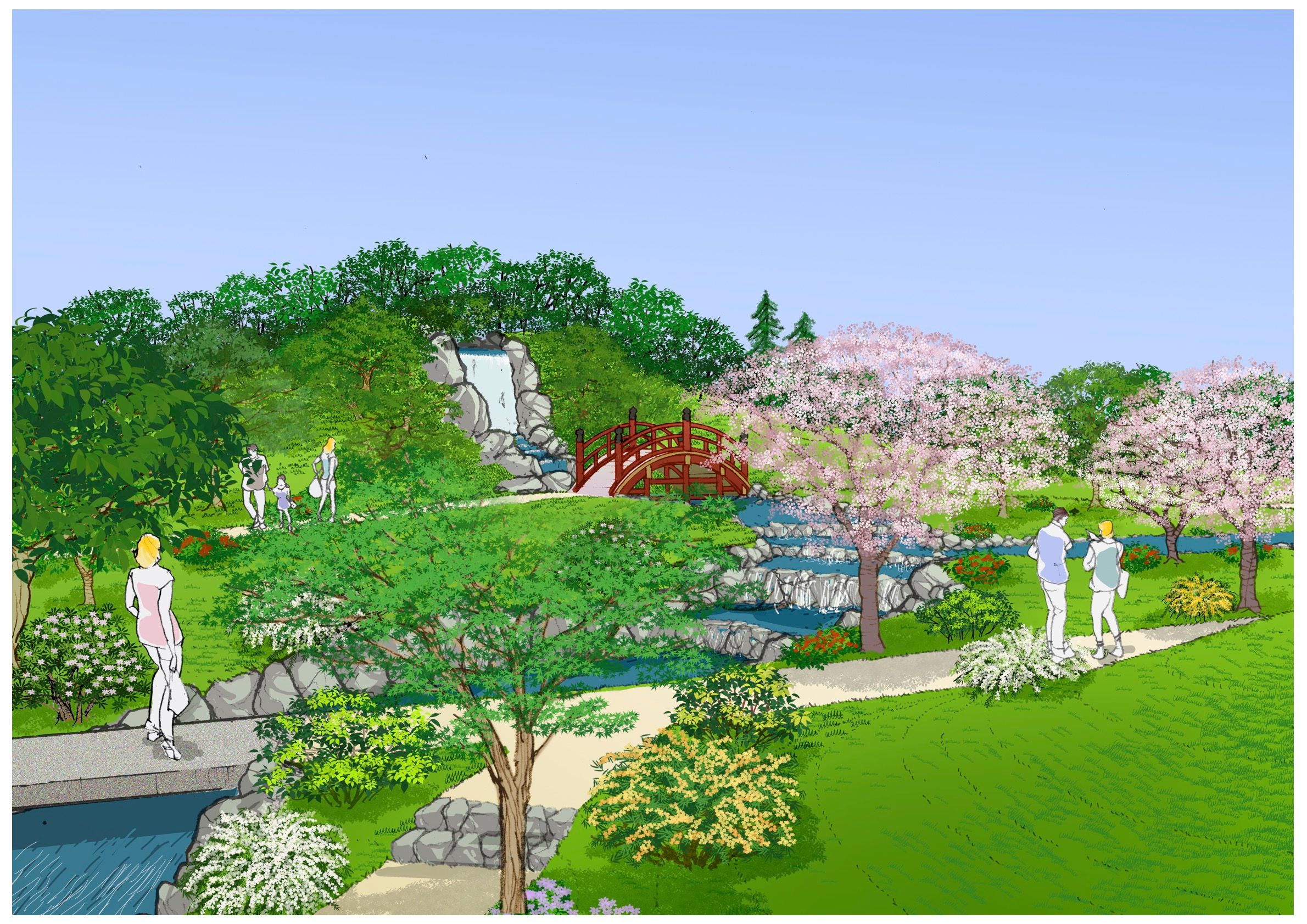 Mr. Nakane was on hand to celebrate the ground-breaking with the Deputy Consul-General of Japan, Masahiko Mitsumoto, elected officials and over one hundred botanical garden supporters, board members, staff and donors. Mr. Nakane spoke not only of the distinctive design of Japanese Gardens but also about the bridging of cultures that takes place when a Japanese Garden is constructed outside of Japan. He shared, “The apparent admiration and esteem enjoyed by the Japanese garden throughout the world are presumably attributable to the recognition of its universal artistic merits, which transcend all racial, religious, and cultural differences.”

The garden will include a traditional Japanese Tea House, designed to introduce the Japanese tea ceremony, one of the most prestigious and symbolic rituals in Japanese culture. Also planned for the Japanese Garden are a summer house, a Zen garden, and a zig-zag bridge over a small lake. The Cornelian cherry tree, a type of flowering dogwood, will be featured in a few areas of the garden.

The bonsai garden has been sponsored by the Graeser family in honor of their parents, Emil and Nancy Graeser. “We are deeply grateful to the Graeser family for their ongoing support in providing vision and resources to bring the gardens to life, and in honoring their parents, Emil and Nancy Graeser, who have been big supporters of our project since the beginning,” said Kasey Maier, president and CEO of the Waterfront Botanical Gardens.

The Graeser Family Bonsai Garden has been designed to balance the traditional design of the adjacent Japanese Garden and the surrounding contemporary design of the Waterfront Botanical Gardens, weaving in design aspects from both spaces. The intent is to create a truly unique garden that celebrates the individuality of each bonsai while also creating an experience that is distinctive to the Waterfront Botanical Gardens. The space includes a winding path with small garden “rooms” for rest, reflection and contemplation about the artful bonsai, and a larger plaza that can be used for educational and social gatherings. The Bonsai House will be used for maintenance and protecting the trees during the winter.

Japanese Garden landscape designer, Shiro Nakane, is working closely with the Waterfront Botanical Gardens team and Perkins+Will, the Waterfront Botanical Gardens architecture firm. Mr. Nakane is the son of renowned traditional Japanese landscape designer Kinsaku Nakane. Shiro Nakane has been following in his father’s footsteps since becoming president of Nakane Garden Research and Landscape Consultant Firm, headquartered in Tokyo, Japan, in 1995. This is Mr. Nakane’s fourth visit to Louisville to see the site of the Japanese Garden and meet with the WBG team. He will return several times to oversee the garden’s construction.

For more information about the Waterfront Botanical Gardens or to inquire about the Japanese Garden, please visit www.waterfrontgardens.org.