Book has been distributed to state’s elementary schools 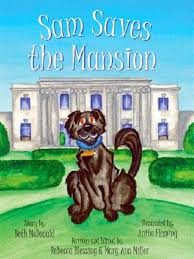 First Lady Jane Beshear, a former teacher, requested the book be produced as an educational resource for young Kentuckians in coordination with the Governor’s Mansion Centennial Celebration in 2014

Kentuckians Rebecca Blessing, a long-time journalist, and Mary Ann Miller, a former teacher, wrote the book based on a story by Frankfort story/creator Beth McDonald. Artist Anita Fleming, of Frankfort, provided the illustrations. Photographer Amy Wallot supplied pictorial support. In early January, a print copy of the book, made possible through support from the Kentucky Executive Mansion Foundation Inc., was distributed to every elementary school and public library in Kentucky.

“Sam Saves the Mansion” is the story of a stray dog named Sam, who one evening sneaks into the Governor’s Mansion to escape from a thunderstorm. While inside, Sam befriends another dog, Tory, who lives in the mansion and gives Sam a tour and history of the 100-year-old residence.  fraid he will be captured and sent to a shelter, Sam, with Tory’s help, devises a plan to leave the historic home without being seen.  Just as he’s getting away, Sam witnesses a disaster in the making and chooses to risk his freedom and stay behind to save the day.

The dogs in the story are named after two of Mrs. Beshear’s own dogs, one of whom, Tory, lives with the Beshear family at the mansion.