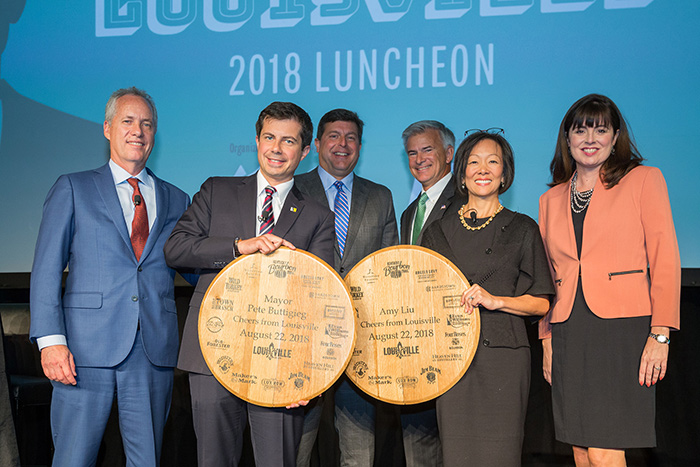 LOUISVILLE, Ky. (Aug. 22, 2018) — Louisville gave a rousing welcome to two nationally-recognized leaders, Mayor Pete Buttigieg of South Bend, Ind. and Amy Liu, VP and director of the Metropolitan Policy Program at The Brookings Institution, with about 1,000 business and civic leaders representing over 300 companies attending the 2018 Leadership Louisville Luncheon on Aug. 22 at the Omni Louisville Hotel.

Hosted by Leadership Louisville Center and the Office of the Mayor and presented by Louisville Gas and Electric Company, the annual event featured a conversation on education, the impact of the digital economy, millennial leadership and the future of mid-size cities.

Keynote speaker Mayor Buttigieg shared about town and gown initiatives with Notre Dame resulting in ‘smart sewers’ among other outcomes, described the importance of cities and local communities being examples of patriotism and America’s greatness, saying “The entire country will find its greatness best fulfilled when we fulfill the everyday.”

Amy Liu moderated a conversation with mayors Fischer and Buttigieg that focused on how Midwestern cities like Louisville and South Bend can stay relevant with changing demographics and the rise of automation, artificial intelligence and machine learning.

Also at the event, the Leadership Louisville Center kicked off its 40th anniversary year by welcoming the audience to its new headquarters at 707 West Main Street, where leading-edge talent development workshops are held, community groups can convene to work on pressing issues, and alumni can drop in for work space.

The Center also announced the topic for the 2019 Bingham Fellows, which will soon begin accepting applications for class participants. The topic is, “It Takes a Village – Mobilizing community for student achievement,” and the Fellows will explore ways that the community and businesses can positively impact student achievement and seek solutions to current barriers to success. Applications will open Sept. 4, 2018 for the class beginning in January 2019. Learn more at this link.

LG&E generously supports the Leadership Louisville Luncheon as the event’s presenting sponsor. Special thanks to our additional supporters: