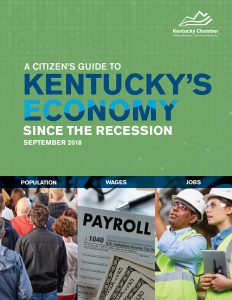 FRANKFORT, Ky. — On Monday, the Kentucky Chamber of Commerce released “A Citizens Guide to Kentucky’s Economy Since the Recession,” a report detailing what has happened in Kentucky and its nine economic regions since the end of the national recession.

The report includes data on where Kentucky stands post-recession compared to the rest of the country as well as specific information about different areas of the state organized into nine regions – Lexington, Mountains, Cumberland, Bowling Green-Hopkinsville, Paducah-Purchase, Owensboro-Henderson, Louisville, Northern Kentucky, and Ashland.

Highlights from “A Citizen’s Guide to Kentucky’s Economy Since the Recession” include:

The study was conducted by Dr. Paul Coomes, the Kentucky Chamber’s Senior Economic Advisor and Emeritus Professor of Economics at the University of Louisville. His area of expertise is regional economics, especially Kentucky and the Louisville region, and has been informing policy decisions through applied research for over 25 years.

“Economic conditions in Kentucky since 2009, the year the national recession ended, reflect a mixed performance. Although the state continues to trail the nation in the growth rate of jobs, population, and wages and salaries, Kentucky has outperformed more than half of its bordering states in those categories,” said Coomes.

“The Kentucky Chamber works every day to build a stronger economic climate in Kentucky.  We’re all about growing businesses, employing more Kentuckians and increasing prosperity for everyone,” said Kentucky Chamber President and CEO Dave Adkisson. “We decided to take a look at the growth of population, jobs and incomes since the Great Recession and compare ourselves to other states.  This report offers a fact-based account of how we’re doing as a commonwealth.”