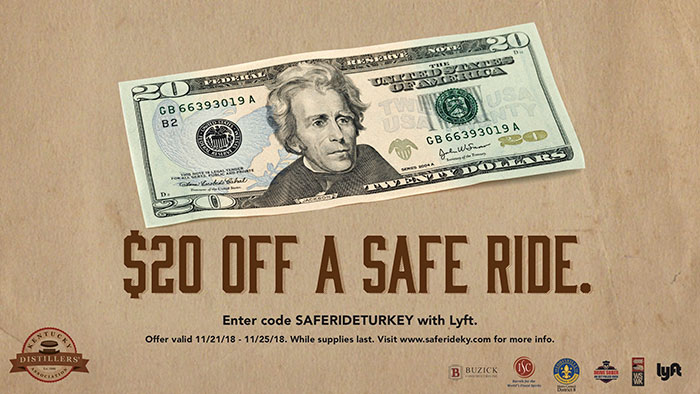 By entering the code SAFERIDETURKEY in the Lyft mobile application, users can get two $10 discounts Wednesday through Sunday.

“The night before Thanksgiving is considered one of America’s biggest drinking holidays of the year,” KDA President Eric Gregory said. “As you gather with family and friends over a glass of Kentucky bourbon, please enjoy it responsibly and in moderation, which includes planning ahead for a safe ride.”

Safe Ride KY is funded by the KDA, Lyft, the Wine and Spirits Wholesalers of Kentucky, Independent Stave Company and Buzick Construction and supported by the Kentucky Office of Highway Safety and Louisville Metro Councilman Brandon Coan (D-8).

“Downloading the Lyft app is generally a consumer’s first step towards using safe rides more regularly,” Gregory said. “That’s what we like to see.”

The campaign – titled “This one’s on us” and produced by Red7e in Louisville – is promoted to consumers of legal drinking age online and in bars, liquor stores and other retail environments where beverage alcohol is sold, and supports the Kentucky Office of Highway Safety’s education and enforcement efforts.

According to Kentucky State Police, 10 drunk driving deaths occurred during the Thanksgiving holiday in the last five years, while holidays like Labor Day (15), Memorial Day (15), Independence Day (14), and Christmas and New Year’s (25) saw Kentucky families lose loved ones to drunk driving, as well.