Home » Health Kentucky | Owensboro Health focused on what matters most

It has been five years since the new Owensboro Health Regional Hospital opened on the city’s east side, but Joe Taylor is still hearing the compliments. The system’s executive director of facilities, Taylor says visitors are often pleasantly surprised to discover such a spacious, beautiful facility in the heart of Western Kentucky. 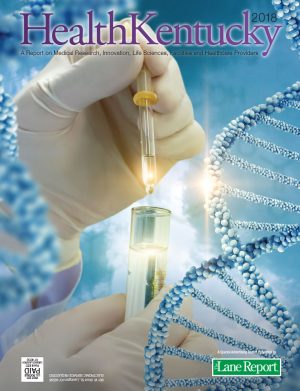 “The positive feedback we receive is a reminder that our hospital was uniquely built to serve the people in this region,” Taylor said. “It was designed to always put the patient first, and it is gratifying to know that those efforts are making a difference.”

Nine stories high and nestled on 160 acres of former farmland, Owensboro Health Regional Hospital makes quite an impression for motorists circling Owensboro via Highway 231 and Highway 60 East. With its granite exterior, curved design and window-lined corridors, the hospital is hard to miss. Fifteen acres of ponds and 50 acres of grasslands surround the facility, which earned Signature Sanctuary status from Audubon International in 2013.

While the beauty of the campus is striking and sets the tone for a healing environment, it is what patients and visitors experience inside the hospital that sets it apart, according to Chief Operating Officer Debbie Bostic. The rooms are cozy and have plenty of space for the family. Nurses quietly monitor patients from specially-built alcoves outside each room. Artwork adorns the hallways and sunlight streams through the bright, airy windows.

“We want our patients and visitors to be as comfortable as possible, and small details are important,” Bostic said. “It’s the special touches, like controlling your own room temperature or having a sofa bed for your family member, that really matter to the patient.”

Patients appear to be responding to Owensboro Health’s efforts to improve the health-care experience, Bostic added, as satisfaction scores rose by 4.5 percent in 2018.

Part of a larger plan

From the beginning, a reimagined patient experience was one of the primary goals for building a new hospital. When Owensboro Health leaders began to dream of constructing a new facility over a dozen years ago, they envisioned a hospital that would transform health care for the entire region.

A new hospital, officials thought, could offer the latest technology and attract some of the brightest health-care professionals to Western Kentucky. It could also serve as the cornerstone of a broader strategy to improve regional health through initiatives, partnerships and education. Plus, by building on a large tract of undeveloped land, there would be plenty of room for future growth and development.

Still, it was not an easy decision, as opening a new hospital would mean leaving the location that had served Owensboro since the 1930s. With careful debate and consideration, the board of directors decided that the region would be best served with a new facility, designed from the ground up, and planning began.

“We took many ideas from those forums and wove them into the design of the hospital,” Page said. “Our goal was to see the health-care experience through the eyes of our patients, and I think we accomplished it.”

Construction at the new Pleasant Valley site began in 2010, and three years later, after a two-week community celebration, Owensboro Health Regional Hospital opened to the public on June 1, 2013. It was a historic occasion that concluded many years of hard work, but the momentum was only beginning.

Since then, Owensboro Health has enjoyed tremendous growth and has expanded its footprint across the region. The health system has added key services like interventional radiology, surgical weight loss and maternal-fetal medicine; acquired a second hospital, Muhlenberg Community Hospital; and opened three new Healthplex facilities in Henderson, Madisonville and Powderly. At over 4,300 employees, Owensboro Health is Kentucky’s largest employer west of Louisville.

All of these achievements are signs that the hospital is fulfilling the vision that was laid out for it: to reinvent patient care and to anchor a new era of expanded health services for the region. But according to Debbie Bostic, quality care and customer service are still the focus at Owensboro Health Regional Hospital.

“The patient will always be our top priority,” Bostic said. “It’s the most important part of our mission, and that will never change.”