LEXINGTON, Ky. — Gas prices are as much as 6 cents cheaper in some states across the country on the week, which has pushed the national gas price average cheaper by a penny to $2.85 Tuesday. That average could have been even lower had a handful of Midwest states not seen prices increase by more than a nickel due to ongoing refinery maintenance.

“Gas prices are lower for the majority of motorists, despite the fact that U.S. gasoline stocks sit at a 7-million-barrel deficit year-over-year. Crude oil prices have remained relatively stable the past few months, which is one reason keeping gas prices lower than last year at this time,” said Lori Weaver Hawkins, manager, public and government affairs with AAA Blue Grass. “Today, motorists can find gas for $2.75 or less at nearly half of all gas stations in the country.”

Compared to last month, today’s national average ($2.85) is cheaper by a penny and is seven cents cheaper year-over-year. 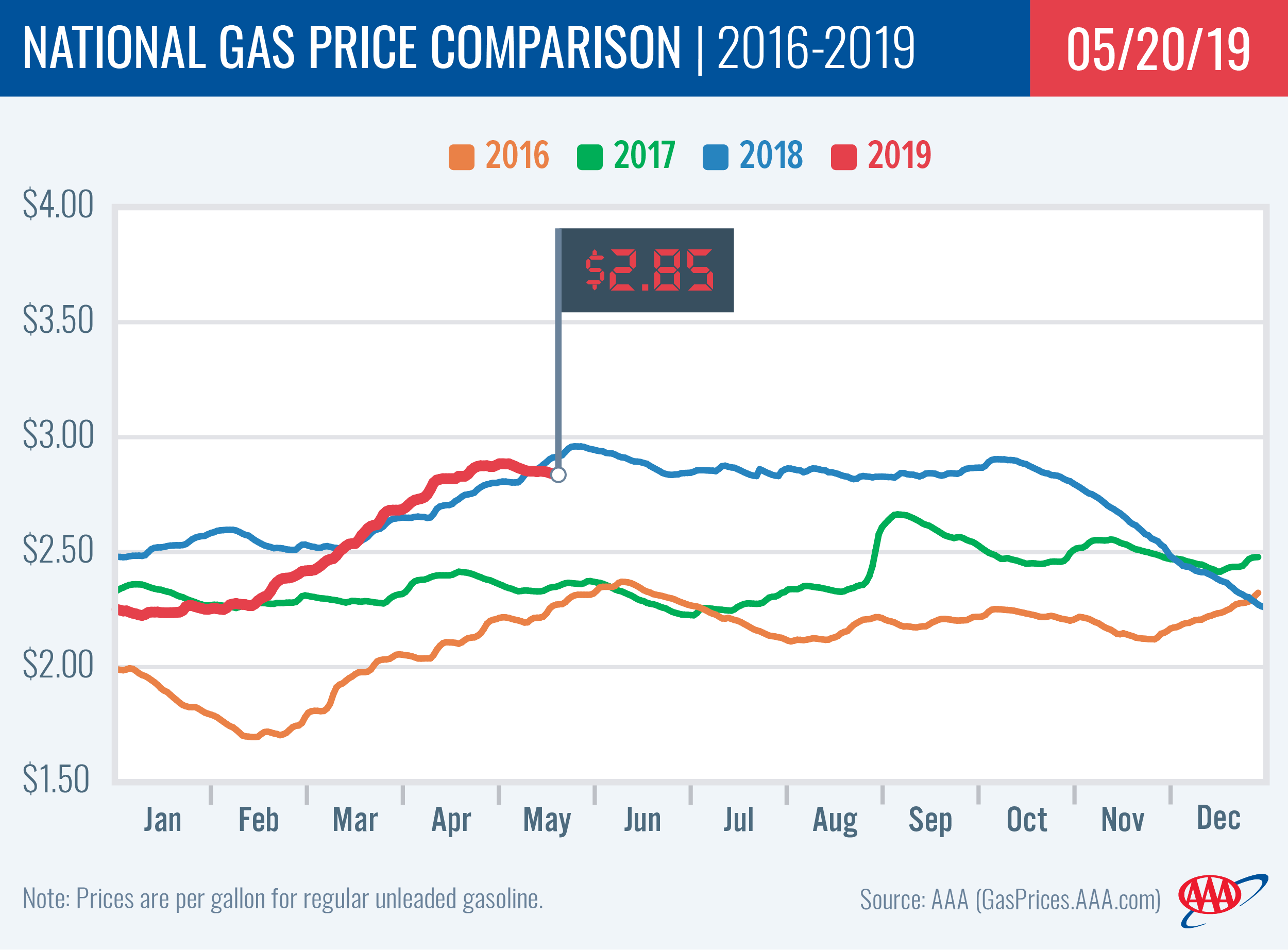 Gas Prices Up and Down Across Kentucky
Gas prices rose in some metro areas in the Commonwealth, while dropping in others. Lexington saw the greatest increase at 17 cents week over week. Henderson saw prices jump 13 cents, the Elizabethtown-Fort Knox area showed a 9-cent climb and Covington posted a penny increase. Those areas seeing a drop in average gas price were Bowling Green with an 8-cent drop, Louisville and Huntington-Ashland with a drop of 6 cents, Hopkinsville with a 2-cent decrease, and Owensboro with a penny drop.

Refinery Maintenance Nudges Gas Prices Higher in Parts of the Central U.S.
Amid refinery maintenance, gasoline stocks dropped by 700,000 barrels, squeezing total levels to 49.4 million barrels, according to the Energy Information Administration (EIA). This is not only the lowest level of the year, but a stock level historically only recorded in the second half of the year for the region and certainly not a level seen going into peak driving season.

The draw was one of the reasons three states in the region were among the top five weekly increases in gas prices in the country: Ohio (+11 cents), Michigan (+7 cents) and Indiana (+3 cents). These jumps mostly wiped out any decreases seen last week for these three states.  All other states in the Great Lakes and Central States saw pump prices decline, some by as much as a nickel on the week.

As previously reported, the region averages stock levels around 52 million barrels ahead of Memorial Day. With levels facing a 2.6 million barrel deficit, motorists should not be surprised if gas prices inch up this month, especially as refinery utilization remains under 90 percent.

Quick Stats on the Nation

At the close of Friday’s formal trading session on the NYMEX, WTI dropped 11 cents to settle at $62.76. Crude prices increased last week due to rising global tensions that saw attacks on oil tankers in the Strait of Hormuz and on a Saudi Arabian oil pipeline. Those attacks only increased supply concerns that have been building due to the United States taking a tough line on sanctions against Iran and unrest in Venezuela and Libya leading to disruptions of supplies from those countries.

Crude prices will likely continue their ascent this week after OPEC and its partners met over the weekend to discuss compliance with the group’s 1.2 million b/d production reduction agreement that has been in place since January 2019. The group will formally decide if it will keep the agreement in place beyond June at next month’s meeting, but after this weekend’s compliance meeting, Saudi Energy Minister Khalid al-Falih said that there was consensus among participants to continue to drive down crude inventories for the remainder of the year.

AAA offers these tips to motorists to save at the pump: