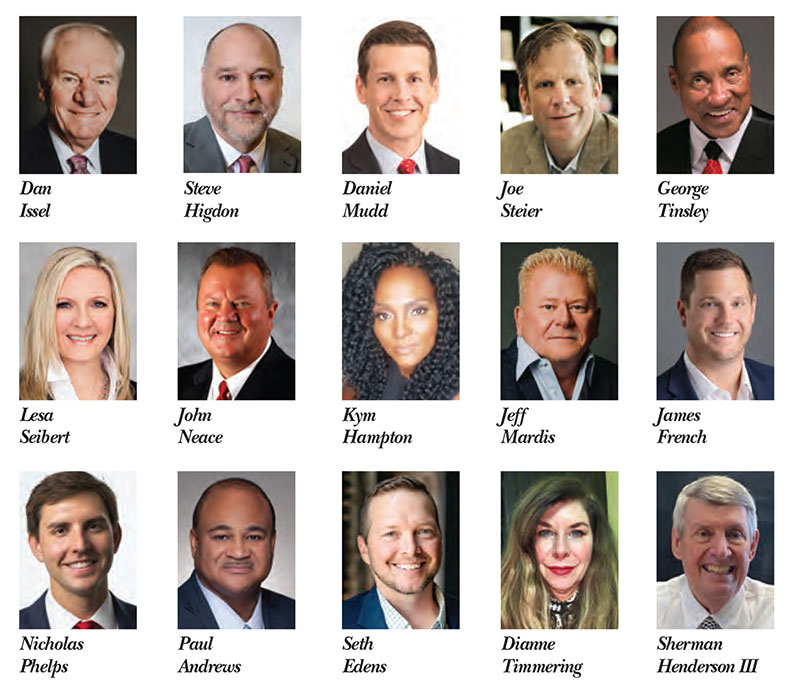 ■ Two Sullivan University College of Pharmacy and Health Sciences faculty members have been appointed to chair committees of the Accreditation for Pharmacy Education. Barbara Jolly, professor and director of lifelong professional development, has been elected chair of the Continuing Pharmacy Education Commission. Abeer M. Al-Ghananeem, professor of pharmaceutics and biopharmaceutics and director of research, has been elected chair of the International Services Program Commission.

■ Thomas Barrow Stephens has been elected to the board of directors of Bluegrass Community and Technical College.

■ David Tudor, vice president of Sullivan University’s Lexington campus, has been elected to the board of directors of Bluegrass Tomorrow, an organization that works to preserve, protect and promote Central Kentucky.

■ Daniel H. Miller has been elected president of the Boy Scouts of America’s Blue Grass Council. Miller is an attorney with Stonecroft Title & Escrow in Lexington.

■ Paul Varga has been appointed to the board of directors at Churchill Downs Inc. Varga is the former chief executive officer and chairman of Louisville-based Brown-Forman Corp.

■ Billy Johnson has been appointed to the board of directors of the Eastern Kentucky Exposition Center Corp. Johnson, of Pikeville, is an attorney with Johnson Law Firm.

■ Jane Greer has been named to Kentucky’s Financial Institutions Board. Greer, of London, is the business development officer at the First National Bank of Manchester.

■ Lois Mateus has been elected to serve on the Kentucky Humanities board of directors.

■ Lisa Circeo and Corey Fannin have been elected to the 2020 board of governors for the Kentucky Justice Association. Circeo and Fannin are founding partners of Circeo Fannin, a civil litigation firm based in Lexington.

■ Scott Borders has been appointed to the Kentucky’s Workers’ Compensation Board. Borders, of Florence, is an attorney at Morgan, Collins, Yeast & Salyer.

■ Seth Todd has joined the board of directors of the Louisville Parks Foundation. Todd is an attorney with Wyatt, Tarrant & Combs.

■ Maxim Crane Works Holdings Inc. has named Michael Kneeland as chairman of the Louisville-based company’s board of directors. Kneeland is the former CEO of United Rentals Inc.

STATE BOARD OF PHYSICAL THERAPY

■ Karen Thompson and Sonya Dick have been appointed to the State Board of Physical Therapy. Thompson, of Louisville, is a physical therapist at Baptist Health. Dick, of Smiths Grove, is an adjunct professor at Crawford Healthcare KCI.

■ Jonathan T. Reynolds has been elected vice president of the World History Association. He will serve a two-year term as vice president and will serve the following two years as president. Reynolds is a professor of history and geography at Northern Kentucky University.

Today is the last day to register to vote in Kentucky

Advertisement | We Believe in Our Local Businesses
Corporate Moves: April 2020