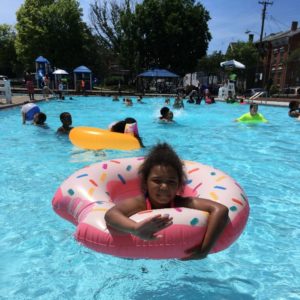 COVINGTON, Ky. — The coronavirus pandemic is ending the summer pool season in the City of Covington even before it begins.

The Covington Board of Commissioners decided Tuesday night not to move forward on issuing the annual contract for the operations and management of the City’s two pools and its water park/splash pad.

The decision tacitly means the pools won’t be opening.

“What with the contract and staff time, we’d be making close to a quarter-of-a-million-dollar gamble with no guarantee that we could salvage even part of what is already a short swim season,” Neighborhood Services Director Ken Smith said in making the recommendation. “That’s a huge investment of money and staff time that would in all likelihood be wasted.”

The contract was technically a one-year extension of an existing contract, and would have cost the city $186,050, officials said. That doesn’t count the internal cost of staff time and materials required to get the pools ready for a season that typically begins around Memorial Day and runs to mid-August.

In a normal year, work would be under way now, including the contractor hiring 35 seasonal employees and the City’s Public Works Department doing everything from firing up the pumps to installing new chlorine lines and calibrating the chlorinators to filling the pools and arranging for health inspections, said Parks and Facilities Supervisor Brad Schwenke.

But this isn’t a normal year. By state order, public gatherings and group recreation is prohibited in the entire Commonwealth of Kentucky – like in many other states – in a desperate but methodical attempt to slow the spread of the highly contagious and sometimes fatal acute respiratory illness called COVID-19.

Health experts and computer models generally agree that the peak of the coronavirus in Kentucky is at least a couple of weeks away and that the illness will remain a serious concern for months – with the possibility of a second wave later in the summer.

The national Centers for Disease Control and Prevention said there is no evidence that COVID-19 can spread in properly maintained pools given that chlorine should make the virus inactive. However, the danger is in the contact among the groups of people that pools attract.

Officials from the Northern Kentucky Health Department say so-called social distancing is a proven pandemic strategy that in Kentucky appears to be slowing the spread of the virus. But they caution that Kentuckians can’t abandon that practice anytime soon or risk a spike in cases.

The City Commission agreed that signing a pool management contract would be foolhardy, given that reality.

Thousands of youth flock to the City’s two full-length pools – Goebel Pool near MainStrasse Village and Randolph Park in Eastside – and to the Latonia Water Park & Splash Pad each season.

She said Parks & Rec would continue to search for ways to offer programs and activities.

“We learn more every day about the lasting impacts of this crisis and continue to look for opportunities to bring fun, wellness and connectivity to Covington residents and visitors, but health and safety is our primary goal.” Santos said. “We will get through this and look forward to a time in the near future where we can be together again, enjoying our parks and recreation services.”