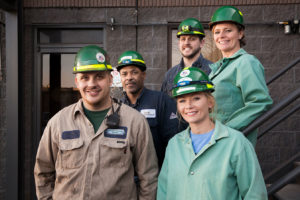 “Nucor Steel Brandenburg will be a difference-maker for its employees, their families, and the economy of Meade County and the surrounding region,” Beshear said. “Nucor already stands as a major employer in the commonwealth, and its continued growth helps build a brighter and better Kentucky for our families. I’m grateful to Nucor and anticipate many years of continued success and partnership between Nucor and Kentucky.”

Located in the Buttermilk Falls Industrial Park along the Ohio River in Brandenburg, the 1.5 million-s.f. operation will provide Nucor with 1.2 million tons of annual capacity for steel plate production. Across the 400 full-time jobs, Nucor executives said, average annual compensation will be $72,000. Positions include equipment operators, production specialists, safety and environmental technicians, engineers, and office support staff. Executives expect the project also will create an average of 960 temporary construction jobs, peaking at 1,500. The mill is expected to open in 2022.

“A core part of our company mission is to support the communities where we live and work. We have been doing business in the state for more than a decade and have found that the people of Kentucky share our company’s values of hard work, determination, and teamwork,” said Leon Topalian, president, and CEO of Nucor Corp. “We thank Gov. Beshear, his administration and local officials in Meade County for their support of this project. We look forward to being a part of the Brandenburg community for decades to come.”

Logistically, Nucor Steel Brandenburg takes advantage of Kentucky’s key geographic location. Access to the Ohio River will allow Nucor to supply the mill with direct-reduced iron and scrap steel by barge. From the center of the U.S. manufacturing corridor, Nucor Steel Brandenburg will be able to quickly and cost-effectively distribute plate products to customers regionally and nationwide. In using an electric-arc furnace, the mill will leverage Kentucky’s highly competitive industrial electricity rates. Last year, Kentucky averaged 5.39 cents per kWh for industrial electric, second-lowest east of the Mississippi River.

Headquartered in Charlotte, N.C., Nucor is North America’s largest recycler and the nation’s largest steel and steel products producer. The company employs over 26,000 people at more than 300 facilities, primarily located in North America.

The company recently completed Phase I of a massive, $826 million expansion project at its Nucor Steel Gallatin mill in Ghent, Ky. That mill, which produces flat-rolled steel coils, is now in the middle of Phase II. In total, the Gallatin mill expansions are creating 145 full-time jobs.

Brandenburg Mayor Ronnie Joyner said the company will have a long-lasting influence on the local economy.

“Nucor is a tremendous addition to our community and one that will have a long-term impact on our community’s workforce,” Mayor Joyner said. “I want to thank Nucor for its decision to locate in Brandenburg, and I expect great things for the company in the years ahead.”

David Pace, chairman of the Meade County-Brandenburg Industrial Development Authority, said he looks forward to what’s next for Nucor and Brandenburg.

“We have long awaited the right opportunity to build Meade County’s industrial presence, and Nucor with its plans for long-term growth is that opportunity,” Pace said. ‘We could not be more excited about what the future holds, and I look forward to working with Nucor well into the future.”

The Kentucky Economic Development Finance Authority (KEDFA) during a special meeting in March 2019 preliminarily approved a 15-year incentive agreement with the company under the Kentucky Business Investment program. The performance-based agreement can provide up to $30 million in tax incentives based on the company’s investment of $1.36 billion and annual targets of:

Additionally, KEDFA approved Nucor for up to $10 million in tax incentives through the Kentucky Enterprise Initiative Act (KEIA). KEIA allows approved companies to recoup Kentucky sales and use tax on construction costs, building fixtures, equipment used in research and development, and electronic processing.